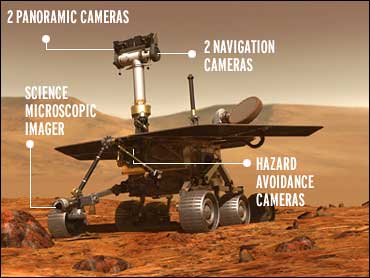 As NASA scientists struggled to revive their ailing Mars rover, they also began to prepare for the landing of its twin, which was scheduled to touch down on the other side of the Red Planet late Saturday night.

Spirit, the first of the $820 million twin rovers sent to Mars to determine if it was once a wetter world capable of sustaining life, began to malfunction on Wednesday, nearly three weeks after landing on the planet's Gusev Crater.

For two days it transmitted only gibberish or sporadic beeps to acknowledge commands from Earth. On Friday controllers said they had begun to hear from it again, but it still wasn't working properly. Its prognosis was uncertain.

But, according to CBS News Space Consultant William Harwood, Theisinger added that Spirit is in "critical conditon."

Even under the best of circumstances, the rover will not be back to normal for many days or even a couple of weeks, he added.

Engineers believe some sort of underlying hardware problem triggered the crisis that has wreaked havoc with Spirit's software and forced the rover to reboot its computer more than 60 times.

At the same time engineers dealt with the crisis, Spirit's twin, Opportunity, neared Mars for its own landing Saturday night.

Three hundred scientists and engineers, divided into two teams, are working on the double mission, and Theisinger has encouraged engineers to stay focused on Opportunity and not dwell exclusively on Spirit and its problems.

Nevertheless, the problems with Spirit will probably force a delay in the sequence of activities that Opportunity will go through after its landing. It took Spirit nearly two weeks after its own Jan. 3 landing to unfold and roll onto the Martian soil.

Spirit began malfunctioning early Wednesday, its 19th day on Mars, transmitting little more than random strings of zeroes and ones, after NASA commanded it to run a motor inside its 5-foot mast. The rover never completed the sequence of tasks.

Spirit's software has not worked properly since, confounding the "onion-peeling" efforts of engineers trying to uncover what is wrong, Theisinger said. Results of attempts to communicate with Spirit, either directly from Earth or through two National Aeronautics and Space Administration satellites in Mars orbit, have been spotty.

Spirit can stay in its current condition for some time while scientists work on the problem, Theisinger said. But the rover has been staying up through the night when it should be asleep. That can draw down its rechargeable batteries and trigger further problems.

The rover had taken thousands of pictures and begun to carry out its first analysis of a Martian rock when what had been a steady flow of science data came to an abrupt halt.

As for the other rover, if Opportunity touches down safely it should signal Earth within minutes of landing, just as Spirit did.

Opportunity's target is an area called Meridiani Planum, whose terrain scientists believe will be dramatically different from the reddish soil of Gusev Crater. Meridiani is expected to be dark gray or black and relatively dust-free.

The region is believed to be rich in a mineral called gray hematite, which typically forms in marine or volcanic environments rich in water. The landing site is 45-mile-long ellipse that is one of the smoothest and flattest places on Mars.

To the west, the landscape appears corrugated. Scientists are not sure what formed the features, but they do know they don't want Opportunity anywhere near them.

"If we landed there, it would be like plowing your way out of a labyrinth," said John Grotzinger of the Massachusetts Institute of Technology, a member of the science team.

Not since the 1976 landing of the twin Viking landers has NASA had two working spacecraft on the surface of Mars.

Sending two rovers was seen as a way to increase the chance of success, as only one in three international efforts to land on Mars has succeeded. Some of the other spacecraft blew up, crashed or disappeared.

The casualties may include the British lander Beagle 2, which has not been heard from since attempting to set down in December.

"We are not yet good at this," said Rob Manning, manager of the entry, descent and landing phase of the NASA project. "We're not at the point where you get in your car, turn the key, and get to your destination."