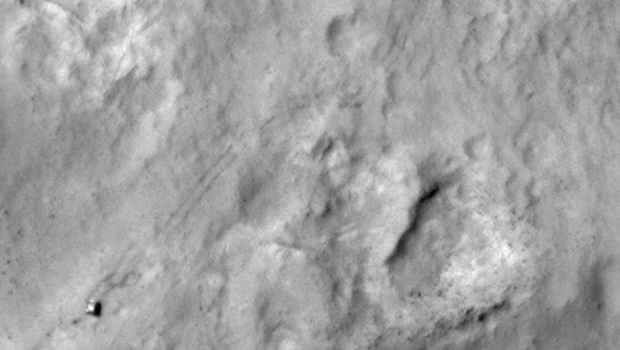 New photos by a sharp-eyed NASA Mars orbiter show the space agency's Curiosity rover trundling across the red planet, on its way to the base of a huge and mysterious mountain.

The 1-ton Curiosity rover and its tracks are visible in two new images taken by the High Resolution Imaging Science Experiment (HiRISE) camera aboard NASA's Mars Reconnaissance Orbiter on Dec. 11, 2013.

"The rover is near the lower-left corner of this view," NASA officials wrote in a description of one of the photos, which was released today (Jan. 9). "For scale, the two parallel lines of the wheel tracks are about 10 feet (3 meters) apart."

Another photo, meanwhile, shows the Curiosity rover's tracks as seen by the MRO spacecraft, but not the rover itself. "This enhanced color image shows where the rover zigzagged to avoid steep slopes and other obstacles on its route toward its long-term destination on the lower slopes of Mount Sharp," NASA officials wrote in an image description.

Curiosity landed inside Mars' huge Gale Crater in August 2012, tasked with determining if the red planet could ever have supported microbial life. The mission has already accomplished that goal, finding that an area near its landing site called Yellowknife Bay was indeed habitable billions of years ago.

In July 2013, Curiosity rover left Yellowknife Bay and began heading for the base of Mount Sharp, which rises about 3 miles (5 kilometers) into the Martian sky from Gale Crater's center. Mount Sharp's foothills have long been Curiosity's ultimate science destination; mission scientists want the six-wheeled robot to climb up the mountain's lower reaches, reading a record of the red planet's changing environmental conditions as it goes.

Curiosity should reach its targeted entry point into Mount Sharp's foothills — which lies about 5.3 miles (8.6 km) from Yellowknife Bay — around the middle of this year, mission scientists have said.

The HiRISE camera on the MRO spacecraft has photographed Curiosity numerous times, even capturing the rover's harrowing descent to the red planet's surface on the night of Aug. 5, 2012. Further, the camera's images have long helped the Curiosity team identify interesting areas for the rover to visit and plan its routes through the sometimes tricky red planet terrain.