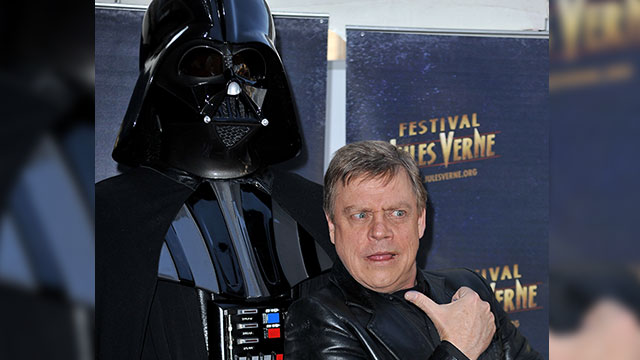 Mark Hamill's new movie "Sushi Girl" hits DVD and Blu-ray this week, and while talking about the project, the "Star Wars" legend was more than happy to provide ETonline with an update on his involvement with the in-development "Star Wars: Episode VII" -- and what he thinks of those planned spin-off movies.

"It's all very, very exciting and so unexpected," says Hamill. "I think that's the quality I like about it most -- it's like getting a pair of pants out of the closet you haven't worn in three years and finding a $20 bill in the pocket. It's just so unexpected."

First off, will he appear in "Star Wars VII"? "They're talking to us," he reveals. "George [Lucas] wanted to know whether we'd be interested. He did say that if we didn't want to do it, they wouldn't cast another actor in our parts -- they would write us out. ... I can tell you right away that we haven't signed any contracts. We're in the stage where they want us to go in and meet with Michael Arndt, who is the writer, and Kathleen Kennedy, who is going to run Lucasfilm. Both have had meetings set that were postponed -- on their end, not mine. They're more busy than I am."

Hamill, 61, says he's intrigued about where the new trilogy could go but says he knows nothing about the storyline: "I probably learn more from 'Entertainment Tonight' than I do directly from Lucasfilm -- like for instance, when George told us he wanted to do the next trilogy, he didn't tell us it was going to be done for Disney. He saved that little nugget, and I read it online like anybody else."

As for his thoughts about the next trilogy's tone, "I said to George that I wanted to go back to the way it was, in the sense that ours was much more carefree and lighthearted and humorous - in my opinion, anyway. And another thing I'd want to make sure of is are we going to have the whole gang back? Is Carrie and Harrison and Billy Dee and Tony Daniels, everybody that's around from the original [returning]? I want to make sure that everybody's on board here, rather than just one. I guess I'll have to tune into your show to figure out who's on board."

In terms of where we'll pick up with Luke Skywalker in "Star Wars VII," "I'm assuming, because I haven't talked to the writers, that these movies would be about our offspring -- like my character would be sort of in the Obi-Wan range [as] an influential character. ... When I found out [while making the original trilogy] that ultimate good news/bad news joke -- the good news is there's a real attractive, hot girl in the universe; the bad news is she's your sister -- I thought, 'Well, I'm going to wind up like Sir Alec [Guinness]. I'm going to be a lonely old hermit living out in some kind of desert igloo with a couple of robots.'"

Hamill concludes of the next movie, "I hope they find the right balance of CGI with practical effects. I love props, I love models, miniatures, matte paintings -- I'm sort of old school. I think if you go too far in the direction of CGI it winds up looking like just a giant a video game, and that's unfortunate. ... If they listen to me at all, it'll be, 'Lighten up and go retro with the way it looks.'"

As for those confirmed stand-alone "Star Wars" films, which may follow the adventures of a young Han Solo, Boba Fett and Yoda, Hamill observes, "That's really smart. Then you're more like James Bond pictures, where they come out and it's not an investment of a three-movie arc. ... It's so rich, that ['Star Wars'] universe, in terms of quirkiness and oddball [nature]. We would talk about that [on the original film's set]. We'd go like, 'That little band that's playing in the Cantina, what's their story?! I mean, are they a traveling band? Are they the house band? Who's their manager?' They didn't have names when we first were talking about them. Now they're called, like, Sy Snootles -- they come up with names down the road when they have to name toys."

So what spin-off movie would Mark Hamill like to see? "Oh, I don't know, set it on the Wookiee planet -- although that might be prohibitively expensive with that many Wookiees," he says with some resignation. After a little more thought, he muses, "That's what I would love. You pick the most insignificant little [character] -- there's this little hawk-beaked character that's somewhere in Jabba's palace, I can't even remember what function he served -- but that's what I would think. You pick something that almost nobody remembers or knows about -- and then have a movie about him! You could probably put about 500 different character's names on a big, giant dart board, throw a dart, and say, 'Okay, wherever it lands we've got to make him the central character.'"

After a hearty laugh, Hamill adds, "I hope we don't overstay our welcome."

In the gritty gangster flick "Sushi Girl," out on DVD and Blu-ray now, Hamill plays against type as Crow, a wisecracking, sadistic criminal who is a bit light in the loafers and gets very creative with a set of chopsticks in order to get the answer he's looking for. "My character gets his kicks inflicting pain on other people," explains Hamill of the powerful indie film that follows a group of gangsters who reunite for dinner -- fresh sushi atop a naked girl -- several years after a diamond heist gone wrong. "He can dish it out, but the minute he gets a little nick or bruise, he's a horrible baby - and I love that he's de facto comic relief [in the movie], because he's just so goofy."

He adds, "The kind of character roles I enjoy doing most I did on Broadway, whether I played the sleazy producer in 'Room Service' or I played 'The Elephant Man' or I played Mozart in ['Amadeus'] ... Those were all complex character roles. Character roles only indicate that they're very different from who you are as a person, and for me, it's fun hiding behind characters that are so unlike who I am."