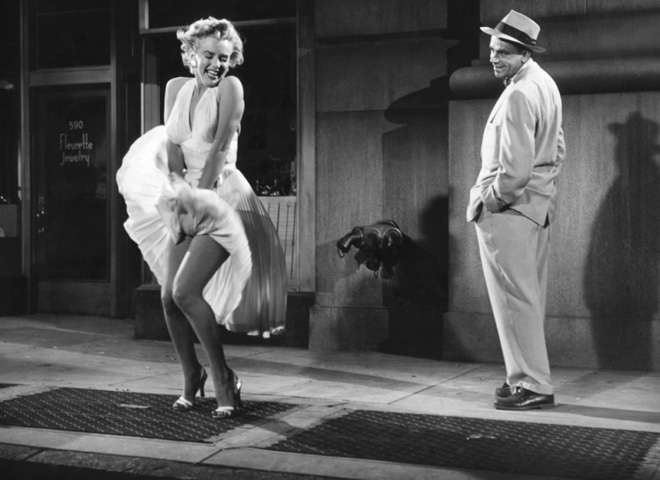 Marilyn Monroe was definitely the star at tonight's auction of Hollywood memorabilia, with the iconic dress she wore in the 1955 film "The Seven Year Itch" sold for a blockbuster $4.6 million.

In a classic movie moment, the ivory pleated Travilla dress billowed up as air rose from the subway grate underneath, revealing Monroe's legs, in the glory of Technicolor and CinemaScope.

Monroe's red-sequin number from "Gentlemen Prefer Blondes" didn't do badly, either, for a "little girl from Little Rock": $1.2 million.

Monroe's saloon girl costume from "River of No Return" sold for $510,000. The gold charmeuse gown covered with bugle beading, red fringe accents, and gold velvet train with red netting benefitted from having been worn by TWO Hollywood goddesses: The Helen Rose dress was originally created for Betty Grable for the "Cuddle Up a Little Closer" number in 1953's film "Coney Island."

And there didn't even have to be much material there to sell: Monroe's skimpy outfit from "Gentlemen Prefer Blondes," which she wore during the "Heat Wave" number, went for a half-million.

But Marilyn wasn't the only apple of collectors' eyes: The blue cotton dress with polka dot trim worn by Judy Garland during her first two weeks' filming as Dorothy in "The Wizard of Oz" pulled in a cool $910,000 - more than ten times the estimate.

The riding outfit young Elizabeth Taylor wore in "National Velvet" was purchased for $60,000.

And the suit of armor that Ingrid Bergman sported as "Joan of Arc" went for $50,000.

The auction, held at the Calabasas, Calif.-based Profiles in History, was the first day on the block of the Debbie Reynolds collection.

The legendary star had for years collected costumes and other items as the Hollywood studios sold or emptied their warehouses.