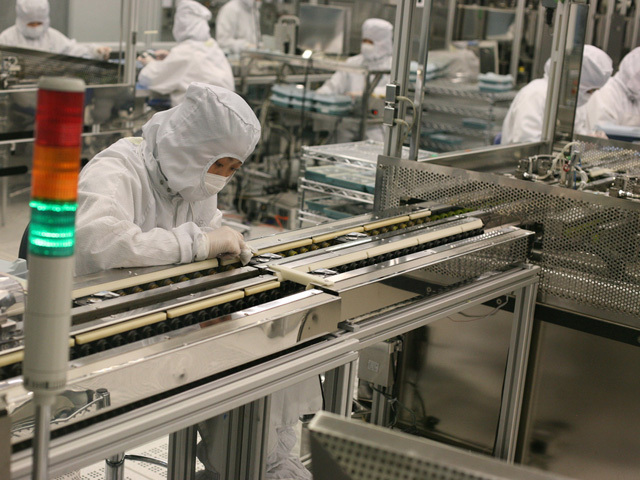 (MoneyWatch) COMMENTARY The net loss of manufacturing jobs from the U.S. to China may have finally come to an end, according to a study by strategy and operations consultancy The Hackett Group. And because of changing conditions in the U.S. and Chinese labor markets, the net shift of jobs may move back to domestic facilities.

However, there's bad news as well. The number of manufacturing jobs in the U.S. is unlikely to ever return to former levels, and service jobs will continue to move offshore for years to come until there are simply no more left to send.

China, Savior of the World's Economy? Uh, Better Think Again
Food Riots in China: It Could Happen in the Center of Global Manufacturing
China as No. 2: Why Its Days as a Manufacturing Outsourcer Are Numbered

The reason manufacturing jobs moved to China from the U.S. in the first place was because of money. It simply cost less to make products there than here. Even though shipping goods back thousands of miles was expensive and there were the accompanying expenses of carrying the two months of inventory that would take 60 days or more to make the journey, lower costs of labor and materials more than made up the additional expenses.

The so-called "total landed costs" that take into account every expense occurred was lower for Chinese-manufactured goods. According to Hackett chief research officer Michel Janssen, products from China were 35 percent cheaper in 2005 than the American equivalent.

Times have changed. Because of domestic unrest and unfavorable publicity like the focus on labor conditions in Apple's (AAPL) outsourced factories, salaries have risen in China. Rising oil prices have contributed to more expensive transportation costs. Some manufacturers have begun to bring jobs back to the U.S.

"For a long time we've been losing jobs," Janssen says. "Now we're reaching a point I call net zero." That is, the number of manufacturing jobs returning has finally balanced the ones leaving.

"The expectations are that by 2013, [the difference in landed costs] will be 16 percent," Janssen says. Coincidentally, 16 percent is the threshold at which U.S. companies say that they would consider moving manufacturing jobs out of China, according to a Hackett survey of major corporations. The chances are that within a few years, the U.S. could see a net gain in manufacturing jobs.

However, there are significant downsides to the news. One is that jobs won't return in the same volume. U.S. manufacturers have continued to use technology to make factories more efficient and the jobs that return will likely be to highly automated facilities that don't need as many people as they once might have.

Also, not all the jobs that are "reshored" will return. Many that depend on lower cost wages and other manufacturing expenses will move to other areas in Asia like Vietnam, South Asia locations like India, and even South America. Also, the move to the U.S. depends on the "implicit deflation in wages here," Jenssen says. So even if jobs that were once well-paying with good benefits return, they may offer significantly less to workers.

The change in manufacturing jobs has had no impact on the move of service jobs in accounting, IT, human resources, customer service, technical support, and similar areas. According to another Hackett study, the net number of general and administrative overhead service jobs moving out of the U.S. this year will likely hit 285,000, continuing a long-standing trend.

But by 2016, the number of service jobs that companies could outsource will have dropped to a million. "We're not going to run out of labor arbitrage opportunities. We just run out of low cost jobs to move," Jenssen says.