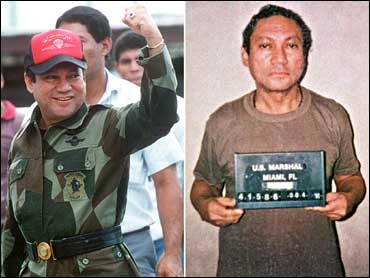 A Paris court on Wednesday convicted former Panamanian dictator Manuel Noriega of laundering drug money in France in the 1980s and ordered him to spend seven years behind bars - a sentence that comes on top of his two decades already spent in a U.S. prison.

The three-judge panel also ordered the seizure of euro2.3 million ($2.89 million) that has long been frozen in Noriega's accounts.

It's a new defeat for the longtime strongman and CIA asset, who was accused of joining forces with drug traffickers - but his lawyers hope it may be a brief one, and predict he could be eligible for parole within a year.

His lawyers were deciding whether to appeal, and have 10 days to do so.

Noriega Goes To Trial In France
Manuel Noriega Extradited by U.S. to France

Noriega, who gives his age as 76, was deposed after a 1989 U.S. invasion and went on to serve 20 years in a Florida prison for drug trafficking. He was extradited to France in April to stand trial on accusations related to his assets here.

The prosecution argued that millions of dollars that passed through Noriega's French accounts during the late 1980s were kickbacks from the powerful Medellin cocaine cartel.

His lawyers had pressed for an acquittal, saying the trial was part of a political plot against him and arguing that Noriega's age and poor health mean he would certainly die behind bars if convicted.

Noriega has blood pressure problems and is paralyzed on the left side following a stroke, his lawyers say. There has long been confusion about his true date of birth.

Noriega served out his U.S. sentence in 2007, but he stayed behind bars for 32 months during a protracted battle to fight extradition to France.

Defense lawyer Antonin Levy said those 32 months count toward the French sentence, which would mean Noriega could be up for parole within a year.

Panama has also sought Noriega's extradition, and if France agrees, Noriega could be sent to the Central American country at any time, Levy said.

Noriega has already been sentenced to 60 years in prison in Panama after he was convicted in absentia of embezzlement, corruption and murdering opponents.

In court, Noriega portrayed himself as a foe of drug traffickers and said the money in his French accounts came from personal and family businesses. He also said some of it was payments from the CIA.

Noriega had long been considered an important CIA asset before he joined forces with drug traffickers and was implicated in the death of a political opponent.

His lawyers suggested his U.S. conviction was part of a strategy to keep Noriega silent after his relationship with the CIA went bad.

Defense lawyer Olivier Metzner said he believed the verdict showed that the U.S. is "continuing to settle their political scores."

"It's a decision that has a political connotation, which is doubtless going to please American authorities," he said.

In an energetic hour-long monologue in court last week, Noriega said his problems began when he refused to cooperate in a U.S. plan aimed at ousting the leftist Sandinista government in Nicaragua in the 1980s. He also blamed the U.S. for a "conspiracy" that has kept him behind bars for 20 years.

France already convicted Noriega and his wife in absentia in 1999 for laundering cocaine profits through three major French banks and using drug cash to invest in three luxurious Paris apartments on the Left Bank. He was granted a retrial.

Noriega is being held at the La Sante prison in southern Paris. His lawyers say the prison is squalid and unfit for a man of his age and rank. France has refused to grant him prisoner of war status, which he had in the U.S.

Behind bars in Miami, Noriega had perks including the right to wear his military uniform and insignia. In France, he is not allowed to wear his trademark uniform and has showed up in court in an ordinary suit.