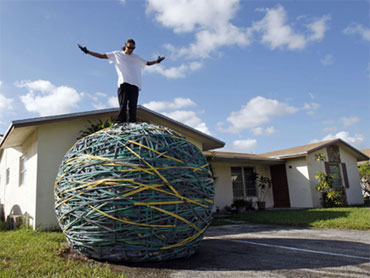 Look, over there. Under that blue tarp in a suburban driveway. That thing that's the size of a Smart car?

Waul has spent the last six years carefully wrapping and linking and stretching rubber bands of various sizes into the ball shape. The Guinness Book of World Records declared it the world's largest rubber band ball in 2008.

On Thursday, Waul said goodbye to his creation. A team from Ripley's Believe it or Not came to his house with a crane and hauled the 6-foot, 7-inch tall, 9,032-pound behemoth away on a large, flatbed truck.

"It's a little bit sad to see it go, but it's going to be appreciated by thousands and hopefully millions of people in Ripley's museum to see and wonder, 'What was this guy thinking?'" Waul said.

The ball will eventually be displayed in a far-off museum yet to be determined, so folks can marvel at Waul's obsession.

Waul got the idea six years ago, when he saw a Ripley's television special that showed the then-largest rubber band ball being dropped into the desert from an airplane.

"I just thought it was the coolest thing I'd ever seen," said Waul, a 28-year-old who works nights restocking a Gap clothing store.

The idea of setting a world record always appealed to Waul; he recalls that as a 7-year-old in Jamaica he pored over his father's Guinness Book of World Records.

Creating a ball was easy. He got a few hair bands together. Then some larger bands. The ball grew to the size of a boulder, and his family took notice.

"When it started getting bigger, they knew I was pretty serious," he said.

The ball eventually got its own Web site. It got too big - and smelly - to keep in the house, so he rolled it outside.

There have been a few casualties: at 400 pounds, it rolled over his hand and sprained it. It busted his big toe. Rubber bands breaking ripped two pairs of cargo pants and broke three pairs of sunglasses.

Eventually, he wrote to companies that manufacture giant rubber bands for physical therapy, and they sent him free shipments.

The ball grew and grew. Neighborhood kids climbed on top of it. Dogs sniffed it.

"That's his masterpiece," said his neighbor, 25-year-old Andre Gregg. "I'm just amazed at how he did it."

Waul and the ball have several followers on their MySpace page, but no one's been mesmerized by the creation more than Edward Meyer, vice president of exhibits and archives at the Orlando-based Ripley's.

"We already have the largest string and barbed wire balls," Meyer said. "This is now my holy trinity, I guess."

Meyer won't say how much Ripley's paid for the ball, which, at 25 feet in circumference, he estimates to be twice as large as the previous record holder.

People like Waul "don't do it for money," Meyer said. "They don't really get rich. They decide they want to do something, and they get possessed. It's very much Andy Warhol, 15 minutes of fame. It is the desire to be the best at something."

Now that Waul has set the rubber bands record, he's focused on the next challenge.