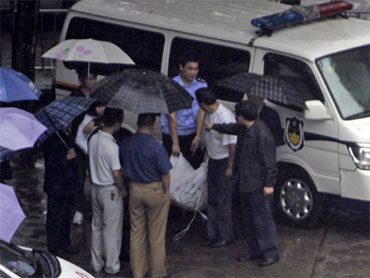 A man firing a small automatic weapon burst into a court office in central China on Tuesday, fatally shooting three judges and wounding three other people before killing himself, an official said.

The shooting spree was one of at least three violent incidents reported Tuesday, the latest in a spate of public attacks - including several on schoolchildren - that has shocked China.

In the court incident, the attacker was identifed as a 46-year-old man who the official Xinhua News Agency reported held a grudge against the court over a ruling it had made in a property division dispute three years ago between him and his wife, who were going through a divorce.

Xinhua identified the assailant as Zhu Jun, a 46-year-old head of security at the Lingling district post office in Yongzhou in Hunan province. He apparently told his co-worker he was taking the automatic weapon and two pistols for an inspection by city authorities then headed to the District People's Court, the official Xinhua News Agency reported.

He fired the gun after breaking into the office on the fourth floor, killing the three judges and wounding three court staff, said a spokesman of the city's Communist Party propaganda department who would give only his surname, Tang.

The official said the judges were discussing a case unrelated to the man.

Zhu, who lived with his elderly parents after the divorce, apparently held a grudge against the court because of its property decision, Xinhua said. The judges Zhu attacked were not involved in his earlier case, the report said.

Though private gun ownership is virtually banned in China, the country has seen a rise in violent crimes amid the free-market reforms of recent years and a loosening of social controls.

Mass violent attacks are typically rare in China, but in recent months, the country has also witnessed a spate of assaults on schoolchildren by attackers wielding knives and in one case, a hammer.

Also on Tuesday, the Harbin Daily reported that a woman in her 40s attacked nine fellow passengers in sleeper compartments on an overnight train from northeastern Harbin to central Hebei province. The woman used a scrap of iron as her weapon, stabbing victims in their arms and legs around 2 a.m. Monday.

The woman, who was not identified, was arrested by police, the report said. Her oldest victim was a 73-year-old woman.

Three of the nine victims were sent to the Jiamusi Railway Hospital, where they were treated and released, said a hospital staffer who gave her name surname as Zhang.

In central Henan province, a man trying to stop the demolition of houses in his village of Nanliuzhuang drove a truck into a crowd of workers, leaving three dead and 13 injured, a district government office said.

"He first stopped his truck in the middle of the road ... then suddenly accelerated the vehicle and crashed into the workers," the Guancheng district office of the provincial capital of Zhengzhou said in a statement to The Associated Press.

The villager, identified as Liu Danao, fled and was being pursued by police, it said.