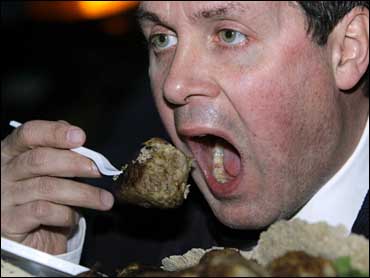 A British performance artist has eaten part of a corgi — the breed of dog favored by Queen Elizabeth II — to protest the alleged mistreatment of animals by the royal family.

Mark McGowan set up a table on a London street and dined on corgi meatballs Tuesday in hopes of drawing attention to media reports that Prince Philip, the queen's husband, had beaten a fox to death during a hunt. The event was broadcast over a live radio program.

"We love our animals in Britain," McGowan told AP Television News. "Why is it then that we then allow people — especially people who are supposed to be ambassadors for this country — to treat animals with such disrespect?"

Buckingham Palace declined to comment, and Britain's top animal-protection charity said there was no evidence to support the claim that Prince Philip abused the fox.

To make the corgi more palatable, it was minced with apple, onion and seasoning, turned into meatballs and served with salad.

McGowan said the corgi he consumed had died recently at a breeding farm and had not been killed for the purposes of the protest. He did not say what the dog had died from.

"I ate three lumps of it. But I spat two of them out, so I really ate one and a-half of them," McGowan said.

The stunt was aired during the Bob and Roberta Smith radio program, broadcast at a London-based arts station.

The queen has a particular fondness for corgis, and they have the run of Buckingham Palace — even in the middle of formal state events.