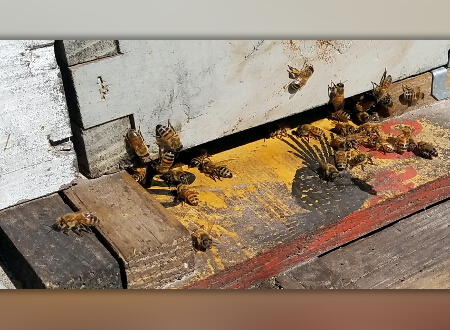 FRESNO, Calif. -- A northern California man has been arrested on suspicion of stealing bees and beehives worth nearly $1 million, CBS San Francisco reports.

According to the Fresno County Sheriff's Office, Pavel Tveretinov, 51, was taken into custody on April 28 at an orchard in Fresno. At the time of his arrest, Tveretinov was tending to more than 100 stolen beehives, officials said.

To date, more than 2,500 hives -- worth about $875,000 -- have been recovered. Investigators believe Tveretinov stole the hives during the past three years. He's accused of renting out the bees to different growers in California, as well as other states, and collecting money for the rental of the hives.

The service is particularly popular among almond growers.

Deputies say the stolen hives belonged to Buzz Beekeeping of Springfield, Missouri. The company, like many other out-of-state beekeepers, contract with California growers to help with the pollination of their crops.

"Every colony of bees I owned except for one," Montana beekeeper Lloyd Cunniff told CBS affiliate KGPE-TV. "So basically, at the age of 56, I had to start over from scratch. They totally put me out of business."

Tveretinov was booked into the Madera County Jail on suspicion of possesing stolen property.