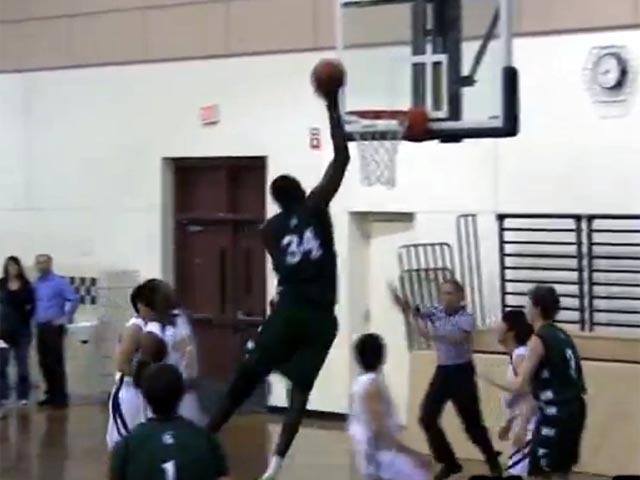 (CBS) - In the world of sports, stars are usually born not made. Some players come to play with natural gifts that their competitors just can't match. In the world of high school basketball, no one is as gifted as Mamadou Ndiaye. The 17-year-old junior stands tall at 7-feet-5-inches, easily the tallest basketball player in the country - professional or otherwise.

The towering Ndiaye hails from Senegal, where he was discovered by scouts in 2010. Even though he is two inches taller than even the largest NBA players, Ndiaye plays for a small, private school in California - the Huntington Beach Brethren Christian School.

At his young age, Ndiaye is still developing. But even with his raw skillset, he averages 22.9 points and 13.2 rebounds a game. At his height, the 17-year-old is basically impossible to defend.

It is equally impossible for a high schooler that large to stay under the radar, and Ndiaye has reportedly been approached by Guiness World Records to determine if he is officially the tallest high school basketball player in the world.

The story of how a lanky Senegalese kid came to play ball in California is a murky one. Ndiaye is at his second high school in two years. The first, Simi Valley Stoneridge Prep, helped Ndiaye get a student visa as well as a physical exam, which discovered he had a large tumor in his pituitary gland. The disorder may account for his oversized growth, but could also lead to complications including blindness.

The school was unable to afford treatment for Ndiaye's condition. But a charity drive was able to amass the needed funds, and a married couple who lives near Brethren Christian became Ndiaye's legal guardians.

The family has remained unnamed, and according to coach Bahnsen, their only goal is for Ndiaye to have the life of a normal high schooler. When he's not imposing his will on the court, Ndiaye can be seen riding his oversized bike around town, and reportedly has become a big fan of Chinese food.