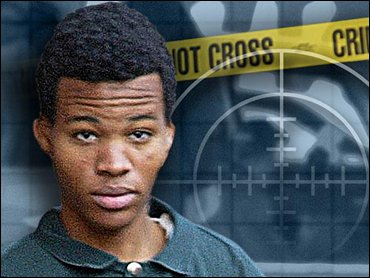 Lee Boyd Malvo could have been vulnerable to brainwashing by sniper mastermind John Allen Muhammad because of a fractured childhood in which his mother often dropped out of his life, a cult expert testified Friday.

"Instability is a factor in indoctrination," said Paul Martin, a psychologist and former cult member himself. "People seek relief from that instability, that sense of insecurity in their life."

Malvo's lawyers are presenting an insanity defense in his capital murder trial, claiming Muhammad brainwashed their client to the point that Malvo could not tell right from wrong.

A series of witnesses testified earlier in the trial that Malvo's mother, Una James, continually moved him from town to town and school to school as she traveled around the Caribbean looking for work.

Martin, who has never interviewed Muhammad or Malvo, offered general testimony on how brainwashing typically occurs, and answered hypothetical questions about how the circumstances of Malvo's life apply in the context of indoctrination. Martin did not give an opinion on whether Malvo was brainwashed.

Prosecutors strongly objected to Martin's testimony, saying he was not qualified to offer opinions on the relationship between Malvo and Muhammad.

Prosecutor Robert F. Horan Jr. argued that any testimony about indoctrination is irrelevant, because brainwashing is not a diagnosable mental illness that can lead to insanity.

"This specific testimony is designed to get the jury to think about things that have nothing to do with this case," Horan said.

The trial will begin its fifth week Monday with the testimony of Dewey Cornell, a clinical psychologist at the University of Virginia who was appointed by the court as the defense's mental health expert.

Cornell's presentation will include a 12-minute clip of the film "The Matrix" as well as clips of violent video games that Malvo and Muhammad played together.

Social worker Carmeta Albarus testified Thursday about Malvo's interest in "The Matrix," in which the hero shoots his way out of a computer-imposed world of virtual reality.

There is no indication in Malvo's case that "The Matrix" is a core issue of the insanity defense.

Albarus was not permitted to talk about Malvo's impressions of the film. But she said she watched the movie and saw Malvo in the role of the hero, Neo, who brings about a massive societal change. Muhammad filled the role of Morpheus, who served as Neo's mentor, Albarus said.

"Neo was going to contribute significantly to change of the system," Albarus said.

Malvo's interest in the novel and TV miniseries "Roots" may have stemmed from a similar interest in fostering social change, Albarus said.

Last month, a jury convicted Muhammad of capital murder and recommended death for one of the 10 sniper slayings that terrorized the Washington, D.C., area over a three-week period in October 2002.