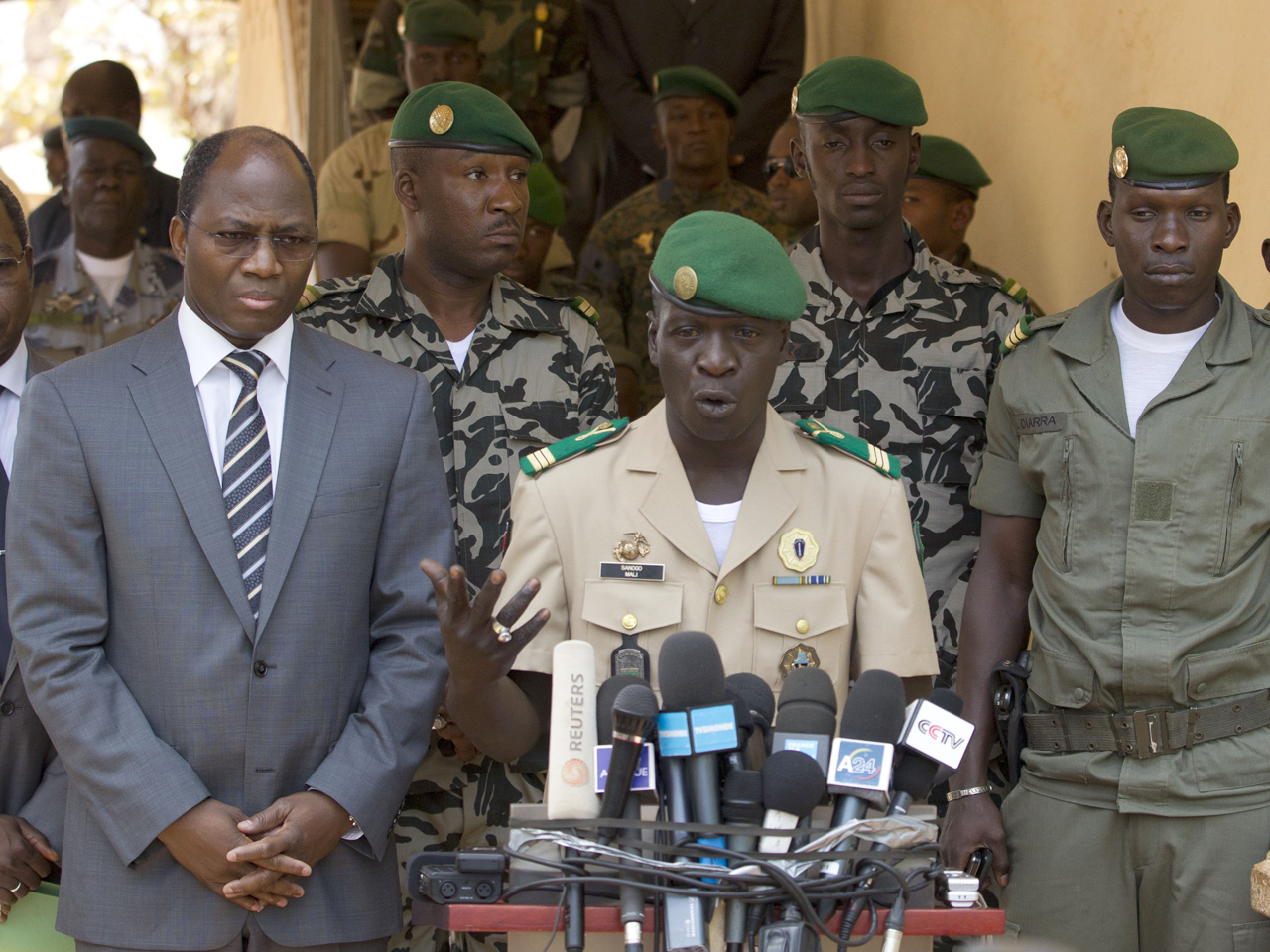 (CBS/AP) BAMAKO, Mali - The day after an embargo was placed on Mali, the soldier who led a recent coup said Tuesday that he agrees with restoring constitutional order, but first Mali's ills need to be addressed by holding a national convention which will decide on the best way forward.

The junta led by Capt. Amadou Haya Sanogo also said it is considering charging recently ousted president Amadou Toumani Toure with high treason and financial misconduct, the BBC reports. They had said previously they staged the coup because of the president's poor handling of the growing Tuareg rebellion.

With Sanogo refusing to step down, surrounding nations have imposed severe financial sanctions on Mali, including the closing of the country's borders and the freezing of its account at the regional central bank.

The embargo went into effect overnight Monday, after Sanogo failed to meet the 72-hour deadline imposed by the Economic Community of West African States, or ECOWAS, which had demanded he hand power to civilians immediately.

In his first comments since the sanctions were imposed, Sanogo invited Malians to join him at a convention Thursday — a convention he had earlier announced would decide on the type of transitional body that will govern Mali, before new elections are held.

"Yes to the return to a constitutional order, but with a new Mali. Our Mali is sick in the depths of her being ... To this effect, we invite the entire political class and all the actors of society to come without exception to the national convention," Sanogo said.

"We dare hope that our fathers at ECOWAS will take note of the decisions and conclusions of this convention, with the end of liberating the country from this impasse."

Mali's neighbors are hoping the embargo will economically suffocate the junta. Until that happens, it's likely to cause great strain to Mali's population of over 15 million.

As the borders closed overnight, panicking Malians holding jerrycans lined up outside gas stations. The nation — roughly twice the size of France — imports all of its fuel, which is trucked in from neighboring Ivory Coast and Senegal, both located on Africa's Atlantic Coast.

The country's electricity grid is also expected to falter. April is one of the hottest months of the year in Mali, and the hydropower system is unable to carry the load because of low water levels. Fuel is used in the hot months to run diesel generators.

Mali's president was sent into hiding on March 21 when a group of disgruntled soldiers mutinied at a military base located around 6 miles from the presidential palace, and then marched on the seat of government. In a matter of hours, they had succeeded in reversing more than two decades of democracy. Rebels fighting a three-month-old insurgency took advantage of the power vacuum and have since effectively wrested control of the northern half of the country.

The United States, France and the European Union immediately cut all but essential humanitarian aid to the country. On Tuesday, State Department spokeswoman Victoria Nuland said the U.S. remained "deeply concerned" about Mali's crisis and that Sanogo must immediately release his "illegitimate grip on Mali and its people."

The Economic Community of West African States, representing six of the eight countries that border Mali has been uncharacteristically harsh in its condemnation of the coup.

An official in neighboring Ivory Coast, whose president is the current chair of the regional body, said that the bloc will not budge in its views until Sanogo returns power to civilians. The official, who could not be named because he was not authorized to speak about the negotiations, added that the junta has not yet felt the bite of the sanctions.

"It will take them four, to five days to realize what is happening. No gas, no electricity, no food. then it will hit them. You cannot live alone," said the senior official. "I would not be surprised if someone puts a bullet through his head, if he continues to insist (on not stepping down)."

In the Malian capital of Bamako on Tuesday, Bathily Seye, the owner of a local chain of gas stations, said if no new shipments are allowed in, his 15 pumps will run dry before the end of the week.

"I don't have the stock. In two days, my pumps will run out of gas," said Seye. "We don't have our own gas. It's all imported," he said. "There is absolutely nothing here."

At a Shell pump in the capital's downtown corridor, the line of cars was so long Tuesday that vehicles were idling on the highway leading to the station. At the front of the queue, farm employee Baba Kounta had climbed into the back of his minibus, where he was filling 12 20-liter jerrycans. He said he needs the gas to power the generators that run the irrigation system at the orange farm outside Bamako where he works.

Waiting his turn behind the minibus was 50-year-old computer tech Nouhoum Kamate, who was sitting in the suffocating heat of his unventilated old Mercedes. A government employee, he had come to the gas station with his March paycheck. It's unclear if the junta will be able to pay civil servants in April because the country's bank account is now frozen.

"I got my salary this past month, but next month?" asked Kamate. "I think we will find a solution. They can't do this embargo forever."