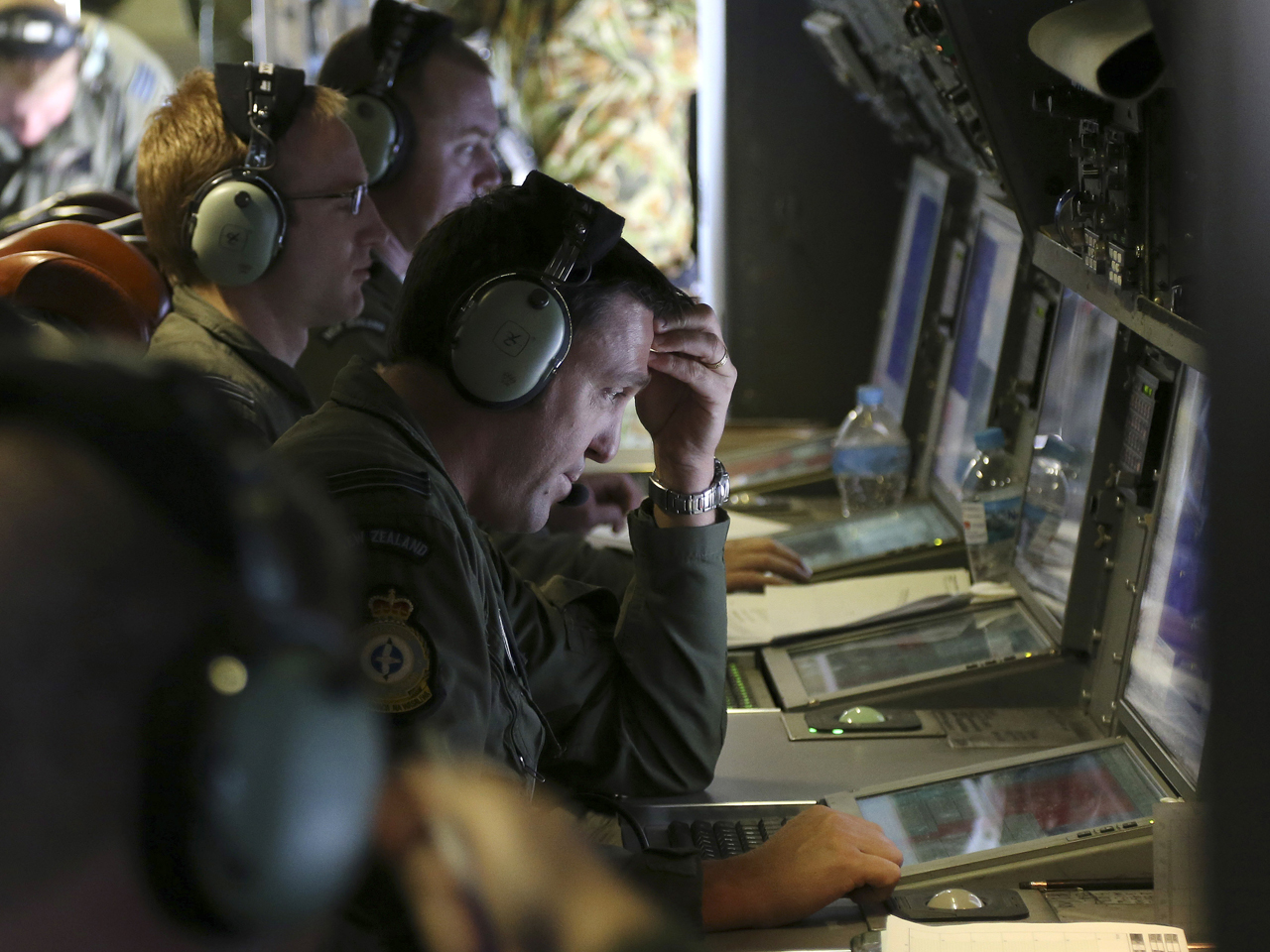 PERTH, Australia - Three separate but fleeting sounds from deep in the Indian Ocean offered new hope Sunday in the hunt for the missing Malaysia Airlines Flight 370, as officials rushed to determine whether they were signals from the plane's black boxes before their beacons fall silent.

The head of the multinational search being conducted off Australia's west coast confirmed that a Chinese ship had picked up electronic pulsing signals twice in a small patch of the search zone, once on Friday and again on Saturday.

On Sunday, an Australian ship carrying sophisticated deep-sea sound equipment picked up a third signal in a different part of the massive search area.

"This is an important and encouraging lead, but one which I urge you to treat carefully," retired Australian Air Chief Marshall Angus Houston, who is coordinating the search, told reporters in Perth.

"What we've got here are fleeting, fleeting acoustic events. ... That's all we've got," he said. "It's not a continuous transmission. If you get close to the device, we should be receiving it for a longer period of time than just a fleeting encounter."

He stressed that the signals had not been verified as being linked to Flight 370, which was traveling from Kuala Lumpur, Malaysia, to Beijing when it disappeared March 8 with 239 people on board.

"We have an acoustic event. The job now is to determine the significance of that event. It does not confirm or deny the presence of the aircraft locator on the bottom of the ocean," Houston said, referring to each of the three transmissions.

A British navy ship has joined others in the area of the Indian Ocean where a Chinese ship reported detecting a "pulse signal."

The HMS Echo is fitted with sophisticated sound-locating equipment that could help determine whether the sounds came from the missing Malaysian plane's "black boxes."

Houston confirmed the report, and said the Haixun 01 detected a signal again on Saturday within 1.4 miles of the original signal, for 90 seconds. He said China also reported seeing white objects floating in the sea in the area.

The British navy ship HMS Echo, which is fitted with sophisticated sound-locating equipment, is moving to the area where the signals were picked up and will probably get there early Monday, Houston said.

The Australian navy's Ocean Shield, which is carrying high-tech sound detectors from the U.S. Navy, will also head there, but will first investigate the sound it picked up in its current region, about 300 nautical miles away, he said.

Australian air force assets are also being deployed into the Haixun 01's area to try to confirm or discount the signals' relevance to the search, Houston said.

In Kuala Lumpur, families of passengers aboard the missing plane attended a prayer service on Sunday that also drew thousands of Malaysian sympathizers.

"This is not a prayer for the dead because we have not found bodies. This is a prayer for blessings and that the plane will be found," said Liow Tiong Lai, the president of the government coalition party that organized the two-hour session.

Two Chinese women were in tears and hugged by their caregivers after the rally. Many others looked somber, and several wore white T-shirts emblazoned with the words "Pray for MH370."

Two-thirds of the passengers aboard Flight 370 were Chinese, and a group of relatives has been in Kuala Lumpur for most of the past month to follow the investigation. Liow said some of them were planning to go home on Sunday.

As for the reason the plane went down, investigators still have few if any leads. There remains no tangible evidence that links an individual to the disappearance of Flight 370, a senior Malaysian law enforcement official told CBS News on Friday.

After weeks of fruitless looking, the multinational search team is racing against time to find the sound-emitting beacons and cockpit voice recorders that could help unravel the mystery of the plane.

Flight 370 was last heard from on March 8. Every plane's black box is fitted with a low frequency acoustic beacon that, when activated after a crash, emits a unique, continuous "ping" for searchers to detect and has a battery life of roughly 30 days. A host of environmental factors, from depth and temperature of the water to the relative damage done to the equipment, can affect both the life of the battery and the ease of the search. The longest experts expect the black boxes to emit that ping is about 45 days, which means it should shut off sometime in the next week.

Investigators believe Flight 370 veered way off-course and came down somewhere in the southern Indian Ocean, though they have not been able to explain why it did so.

The crew of the Chinese ship reportedly picked up the signals using a hand-held sonar device called a hydrophone dangled over the side of a small runabout - something experts said was technically possible but extremely unlikely.

The equipment aboard the Ocean Shield and the HMS Echo are dragged slowly behind each ship over long distances and are considered far more sophisticated than those the Chinese crew was using.

Footage aired on China's state-run CCTV showed crew members in the small boat with a device shaped like a large soup can attached to a pole. It was hooked up by cords to electronic equipment in a padded suitcase as they poked the device into the water.

"If the Chinese have discovered this, they have found a new way of finding a needle in a haystack," said aviation expert Geoffrey Thomas, editor-in-chief of AirlineRatings.com. "Because this is amazing. And if it proves to be correct, it's an extraordinarily lucky break."

There are many clicks, buzzes and other sounds in the ocean from animals, but the 37.5 kilohertz pulse was selected for underwater locator beacons because there is nothing else in the sea that would naturally make that sound, said William Waldock, an expert on search and rescue who teaches accident investigation at Embry-Riddle Aeronautical University in Prescott, Arizona.

"They picked that (frequency) so there wouldn't be false alarms from other things in the ocean," he said.

But after weeks of false alarms, officials were careful Sunday not to overplay the development.

"We are hopeful but by no means certain," Australian Prime Minister Tony Abbott said of the detection of the signals.

"This is the most difficult search in human history. We need to be very careful about coming to hard and fast conclusions too soon," Abbott told reporters during a visit to Japan.

Houston, the search coordinator, conceded that his organization first heard about the initial signal China had detected when it was reported by a Chinese journalist aboard the Haixun 01. He said that at "almost the same time" he was informed of the development by the Chinese government.

The agency was formally told about the second Chinese detection on Saturday "in absolutely the normal way," he said.

"China is sharing everything that is relevant to this search. Everything," Houston said.

Still, the search agency will be adding a Chinese-speaking liaison officer "to make sure nothing falls through the cracks," he said.

Houston also said there had been a correction to satellite data that investigators have been using to calculate Flight 370's likely flight pattern. As a result, starting on Monday, the southern section of the current search zone will be given higher priority than the northern part.

The signals detected by the Chinese ship were in the southern high priority zone, Houston said.

Up to 12 military and civilian planes and 13 ships took part in the search Sunday of three areas totaling about 83,400 square miles. The areas are about 2,000 kilometers 1,200 miles northwest of the Australian west coast city of Perth.