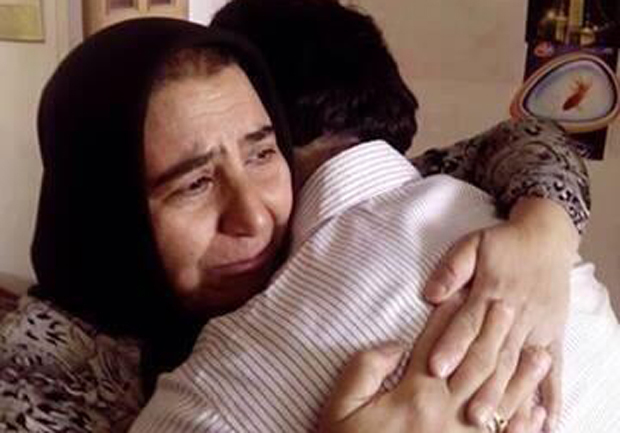 In 2009, prominent Iranian activist Majid Tavakoli was arrested (again) for criticizing the country's leadership and protesting its disputed presidential election. He's been imprisoned ever since, enduring a hunger strike that reportedly left him critically ill.

On Monday, Tavakoli was a free man - thanks in part to a U.S.-based human rights activist who reignited a campaign to release him after confronting Iran's foreign minister in New York.

The unlikely saga unfolded at a gathering after the U.N. General Assembly last month. Keyes asked Iranian Foreign Minister Javad Zarif if he thought it was ironic that he enjoyed posting on Facebook when his government bans it in Iran. Keyes says Zarif simply chuckled and replied: "That's life."

Then Keyes asked Zarif when Tavakoli, one of Iran's most prominent student activists, would be freed. Zarif's response: "I don't know him."

Whether Zarif was being truthful or not is debatable but he certainly knows him now. Keyes wrote a piece for the Daily Beast earlier this month, recounting his interaction with Zarif and Iran's U.N. ambassador Mohammad Khazaee. Keyes says Khazaee also denied having any knowledge of Tavakoli and several other high-profile political prisoners in Iran.

Keyes says thousands of Iranians took to social media to demand to know how it was possible that the foreign minister and U.N. ambassador were in the dark about the nation's famous political prisoners. Zarif's Facebook wall was flooded with pleas to free Tavakoli.

On Friday, Keyes was a guest on Kambiz Hosseini's show (the "Iranian Jon Stewart") to talk about the political prisoner.

Just a few days later, Tavakoli was freed on furlough.

After Tavakoli's release, journalist Negar Mortazavi tweeted a picture of the activist hugging his mother as well as a picture of students celebrating his freedom:

Keyes says the backlash on Facebook was the catalyst for Tavakoli's release.

"(Zarif) was being shamed by so many people," Keyes said. "It wasn't worth the price."

According to Human Rights Watch, Iran's political prisoners include hundreds of activists, journalists and lawyers. Keyes says more than 500 have been arrested since 2009 alone.

Keyes says he is heartened by Tavakoli's temporary release but remains wary of Tehran's recent overtures to thaw relations with the West.

"I think Iran is talking a good game ... but its actions remain extremist," he said. "It's wonderful Tavakoli was freed but so much work still needs to be done if Iran is to open itself up."