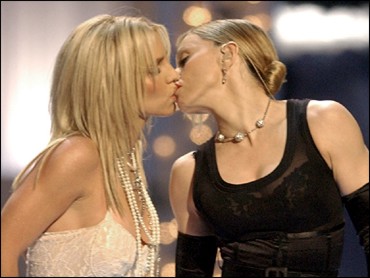 Twenty years after the first MTV Video Music Awards, and not much has changed — Madonna still makes jaws drop and cheeks blush.

Just like her first time, the superstar upstaged everyone at the 20th annual MTV Video Music Awards, only she had help Thursday night from the latest generation of video divas, Britney Spears and Christina Aguilera.

Proving they've come a long way from their Mouseketeer days, the young pop tarts gave a gyrating, writhing tribute to Madonna to open the show. Dressed in the same kind of white bustier wedding dress Madonna wore while performing "Like a Virgin" during MTV's inaugural awards broadcast in 1984, Spears and Aguilera sang a cover of the not-so-innocent tune.

Then, while Madonna sang her new "Hollywood" in a masculine, all-black groom's outfit, she shared an openmouthed kiss with both Aguilera and Spears. The two smooches rivaled the Michael Jackson-Lisa Marie Presley kiss at the awards in 1994 on the shock meter.

It was all in a night's work for MTV's annual extravaganza, where mere music takes a back seat to wacky antics, barely there outfits and eye-popping performances.

There were no big winners — Missy Elliott's "Work It" won two awards, including video of the year, while Justin Timberlake, Coldplay and Beyonce had three apiece. The 71-year-old Johnny Cash, nominated seven times for "Hurt," won once.

As usual, the most memorable moments had nothing to do with the moonmen trophies.

Besides the bump-and-grind number by Madonna, Spears and Aguilera, there was 50 Cent's performance of "P.I.M.P.," during which he was joined onstage by Snoop Dogg, the ubiquitous Bishop Don Magic Juan, members of his G-Unit posse — and a bevy of half-naked women.

"Today is the anniversary of Martin Luther King's "I Have a Dream' speech — isn't it nice to see that his dream has finally come true?" cracked host Chris Rock after 50 and company left the stage.

Eminem, who won one moonman for best video from a film for "Lose Yourself," poked fun at himself and his verbal tussle with a smart-mouthed puppet at last year's awards show.

"I got into this little anger management program ... and today I stand before you a changed man," said Eminem, onstage with the puppet "Special Ed" from the Comedy Central series "Crank Yankers."

"Working with Ed has taught me that puppets, just like people, have feelings too," Eminem said gently — before attacking the puppet for repeatedly talking over him.

Kelly Osbourne and Avril Lavigne surprised Duran Duran — who had never won an MTV award — with a lifetime trophy.

At least one member of the group, which recently reunited, was in disbelief.

"I think we've been 'Punk'd' actually. I think they're going back," said Nick Rhodes.

And Fred Durst and Jack Black poked fun at last year's embarrassing moment, when Michael Jackson thought a birthday trophy presented to him was an "Artist of the Millennium" award.

"If someone had told me, when I was a kid, that I was going to win the super-genius of the century award, I would have never of believed it," gushed Black, wearing a Jacko-esque outfit complete with metallic shin guards.

The evening had a potential to be poignant. Cash's haunting "Hurt" threatened to upstage all the craziness at the Radio City Music Hall extravaganza, but The Man in Black's hopes to attend were dashed when he was hospitalized with a stomach ailment.

Cash's video, nominated for video of the year, best male video and best direction, among others, was hardly a staple on MTV over the past year. His cover of the Nine Inch Nails song wasn't played very much, and most die-hard MTV watchers may not recall even seeing it. But it resonated with those who vote on the nominations, including music executives, video directors and journalists. It won for best cinematography.

More people were familiar with Missy Elliott's "Work It," the most-nominated video, which had eight nods. The music clip was loaded with special effects, dancing and surreal images. It won the evening's first award, for best hip-hop video, which Elliott picked up after participating in the Madonna tribute.

Beyonce's sexy video "Crazy in Love," featuring her boyfriend Jay-Z, won three awards. She gave a showstopping, hip-shaking performance with dozens of dancers, garnering a standing ovation from the crowd.

Nominated for seven awards was Justin Timberlake's "Cry Me a River" video, which takes a not-so-subtle dig at ex-girlfriend Spears; the video features Timberlake exacting revenge on a cheating Spears look-alike.

"This is a travesty! I demand a recount," he said, before paying tribute to Cash.

"My grandfather raised me on Johnny Cash," he said, "and I think he deserves this more than any of us in here tonight."