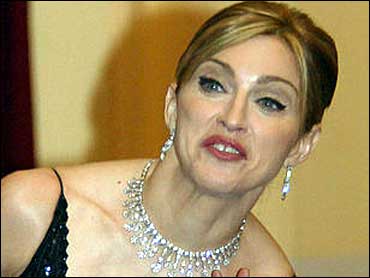 Madonna has complained to Britain's press watchdog about a magazine article claiming she was pregnant, the Press Complaints Commission said Wednesday.

A commission spokeswoman said the singer-actress had contacted the organization to say a report in celebrity magazine "Heat" was "inaccurate."

Heat reported in its latest issue that Madonna, 44, had visited a birth specialist in London at the end of last year. The magazine noted her baggy clothes and that she'd stopped dying her hair, which some pregnant women choose to do.

Madonna's spokeswoman, Liz Rosenberg, was quoted by the British Broadcasting Corp. as saying there was no truth in the report.

"It's not true, it's not accurate. She dyed her hair brown instead of blond - that does not confirm somebody's pregnant," Rosenberg said.

Madonna, who's married to British filmmaker Guy Ritchie, has a 6-year-old daughter, Lourdes, from her relationship with ex-boyfriend Carlos Leon, and a 2-year-old son, Rocco, with Ritchie.

The commission said it would contact Heat in an effort to settle the matter. If no agreement is reached, the commission could rule that the magazine had breached Britain's press conduct code, although it has no power to fine offenders.

Madonna and Ritchie have two homes in Britain, and she receives intense scrutiny from the tabloid press. Recent reports claimed Madonna had left the city for Los Angeles, defeated by the dreary English weather.

Rosenberg said Madonna plans to return to London in the spring.