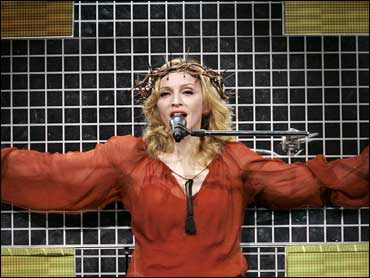 With Madonna urging people to see her show before criticizing her for mounting a Crucifix during one song, NBC is still wrangling over whether millions of television viewers will get that chance.

The network plans to air a Madonna concert special culled from her current "Confessions" tour during the November ratings sweeps period, which is used to set advertising rates.

During her performance of the song "Live to Tell," Madonna is shown on a mirrored cross wearing a crown of thorns. That angered some religious leaders, particularly before her concert in Rome, and they labeled it a bad-taste publicity stunt.

Madonna said in a statement Thursday that there had been so many "misinterpretations" about her act "I wanted to explain it myself once and for all."

The pop star, whose "Like a Prayer" wasn't a big hit among religious leaders two decades ago, said that in her show she and three dancers "confess" or share harrowing experience from childhood that they overcame. She makes her confession from the cross.

"This is not a mocking of the church," she said. "It is no different than a person wearing a cross or `taking up the cross' as it says in the Bible. My performance is neither anti-Christian, sacrilegious or blasphemous. Rather, it is my plea to the audience to encourage mankind to help one another and to see the world as a unified whole. I believe in my heart that if Jesus were alive today he would be doing the same thing."

She's asking the audience to do what they can to help children dying in Africa, she said.

"Please do not pass judgment without seeing my show," she said.

The Catholic League has written to NBC executives, urging that the crucifixion scene be left out of the special. The group pointed to NBC News' stance last winter during an uproar among Muslims over Danish cartoons that depicted the Prophet Muhammad. NBC News did not show the entire cartoon.

"If (NBC) does air the `mock crucifixion,' it will send a message to the 85 percent of the American population that is Christian that their sensibilities count less than Muslims," Donohue said. "And that is not a decision that any responsible person or company can afford to make."

TVGuide.com said on Thursday that in an interview several weeks ago, NBC Entertainment President Kevin Reilly said that the crucifixion scene will probably be in the NBC special, adding that Madonna "felt strongly about it."

"We viewed it and, although Madonna is known for being provocative, we didn't see it as being ultimately inappropriate," Reilly said, according to the Web site.

NBC entertainment spokeswoman Cameron Blanchard said Thursday that producers and executives are still discussing the issue and that no decision had been made.