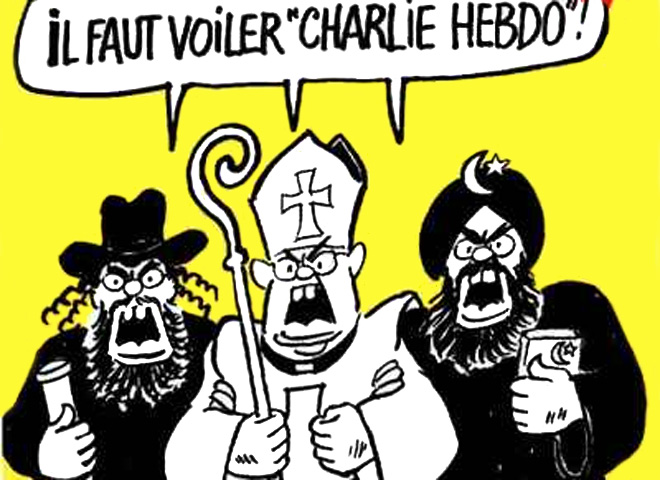 This week's New Yorker is just one of countless publications around the world honoring the victims of the Charlie Hebdo massacre. The mass shooting at a satirical magazine strike very close to home for the editor-in-chief of Mad Magazine, John Ficarra:

When I was in college, a journalism professor once told me that freedom of the press is a freedom that has to be re-won every generation. I didn't quite understand what he meant back then, but given the developments of the past few weeks, I do now.

The hacking of Sony Pictures and the resulting pulling of a major American movie from theatres, at least temporarily, sent a shiver down the spine of many Americans in the creative community. Little did any of us realize that the hacking incident was prelude to a much more serious attack on free speech, artistic expression and, especially, humor and satire.

I won't pretend to understand the mindset of the extremists who massacred 12, including the four cartoonists and the editor of Charlie Hebdo. How anyone could be so offended by cartoons that they would be inspired to kill a fellow human being is something I will never comprehend.

The satirists who were murdered in cold blood were killed for simply doing their job.


Yes, they were outrageous. Yes, they were pushing the boundaries of what is acceptable. And incredibly, they were doing it under a constant threat to their own safety.

Over the years MAD Magazine has offended many powerful people, including many in the religious community.

MAD never makes fun of people's beliefs, but we were merciless on the Catholic Church for covering up the child abuse scandal. And after 9/11, we went after Jerry Falwell hard for blaming the 9/11 attacks on gays, feminists, abortionists and the ACLU.

We knew that at the end of the day, no matter how much we lampooned Falwell or the Catholic Church, we shared a common set of values and rules of engagement.

The worst that could happen to us was that we would get a stern letter from their lawyers -- we live for those. Not once did we ever fear for our safety.

Those were the good old days.

When "Sunday Morning" approached me about doing this commentary, I paused. My first consideration was, did I have something interesting to add to the discussion? You can be the judge of that. But I also paused because in this unsettling new world, I couldn't know the ramifications of my decision. By the simple act of appearing on camera denouncing the terrorists and defending the rights of cartoonists and satirists, would I be drawing a target on my back and the backs of my colleagues?

Unfortunately these days, those are not unfounded fears.

And the very fact that I had these fears? Score one for the terrorists.

On the other hand, come Monday morning, my staff and I will be back at work on the next issue of Mad.