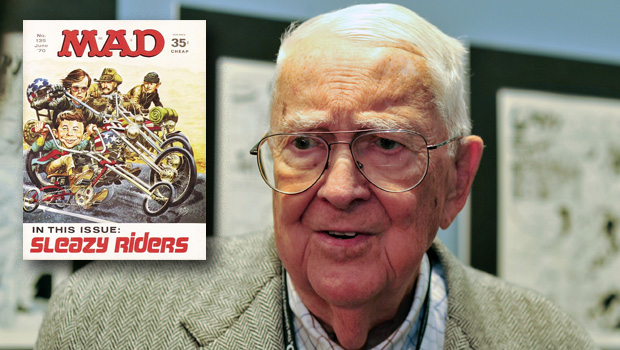 He passed away Wednesday morning in St. Simons, Georgia, of natural causes, according to his son-in-law, Chris Lloyd. He was 91.

As a struggling young artist in New York, Davis was "about ready to give up, go home to Georgia and be either a forest ranger or a farmer," he recalled in an interview a few years ago. Then, in 1950, he scored the first of many sales of his artwork to EC Comics, which published a line of horror titles including "Tales from the Crypt."

He stuck with its editors -- William M. Gaines, Albert B. Feldstein and Harvey Kurtzman --when they launched the pioneering satire magazine Mad in 1952. He remained a member of "The Usual Gang of Idiots" (as the magazine billed them) for the next six decades. His far-flung illustrations poked fun at politicians and celebrities along with countless portraits of the magazine's perpetually grinning mascot, Alfred E. Neuman.

Along the way, Davis also created numerous covers for TV Guide and Time, and provided artwork for books, record jackets, and posters for films including "It's a Mad, Mad, Mad, Mad World," ''American Graffiti" and Woody Allen's "Bananas."

While Davis was masterful at caricatures of recognizable figures, he took amusing liberties with all his subjects, endowing them with distinctly large heads, pipe-stem legs and snowshoe-size feet.

As a proud alumnus of the University of Georgia (which he attended on the G.I. Bill after three years in the U.S. Navy), he continued to produce innumerable billboards and other artwork celebrating the "Dawgs" throughout his life.

"Jack Davis was a seminal figure in illustration of the last century," said Chris Garvin, director of the UGA Lamar Dodd School of Art. "His work was both timely and timeless. It perfectly expressed the era in which he worked."

Davis is survived by his wife, Dena, of St. Simons, Georgia, as well as a daughter and a son.