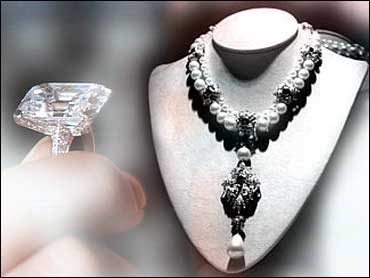 In tough economic times many consumers downsize their budgets and spending, but as Tracy Smith discovered, the market for high-end luxury items is still going strong.

Take a Ferrari for example: at prices of over $200,000, one might assume that buyers might downsize to more moderately priced vehicles. But the Italian automaker says its sales are only down four percent and that there's still a year-long waiting list for the luxury sports cars, proof that even in these tight times the luxury market lives on.

If you think lifestyles of the rich and famous went the way of two-dollar a gallon gas, think again. According to Chrystia Freeland of the Financial Times, the uber-wealthy can still afford uber-shopping,

Freeland says the luxury market is really a tale of two parts. "There are the super luxuries for the super rich, and they're doing okay," she says.

But as Freeland points out, it's the lower-end luxury market that's losing out. "And then there are the aspirational luxuries. The treats for the middle classes, the $500 handbag. And those sectors are really starting to feel the pinch."

Big yachts for example are still selling, like the floating mansions by Trinity Yachts that are 150 feet and up, with price tags ranging from $30 to well over $100 million.

But business for smaller yachts as hit choppy seas. Asked if the business is currently in the middle of the storm, Dick Curry of Staten Island Yacht Sales says, "We're coming down off the 20-foot wave."

That seems to be true for trinkets, too. John Green of the Jewelers Of America says while trendier jewelry may be taking a hit, the market for really high-end baubles is still hot.

"They're coming in and actually they're looking for bigger and better quality than they've ever done in the past," Green explains.

And there's one luxury biz that may actually be benefiting from the economic blues: Botox.

And Dr. Airan thinks consumer will even get their Botox shot even if they may have to scrimp somewhere else. "I mean if it's a choice between the newest luxury handbag and or looking as good as you can, I think people are always going to choose looking as good as they can," she says.

So even though people still may be struggling in this economy, you may not see them frowning about it.

Luxury travel is following the same trend: the swankiest of trips are still selling, like trips to learn French cooking in Provence or to play golf in Dubai. It's the so-called "aspirational customers" who are downgrading their vacations a bit.

But protesters and law enforcement clashed in a Minneapolis suburb for the third night in a row. A decision on whether to charge the officer could come today.