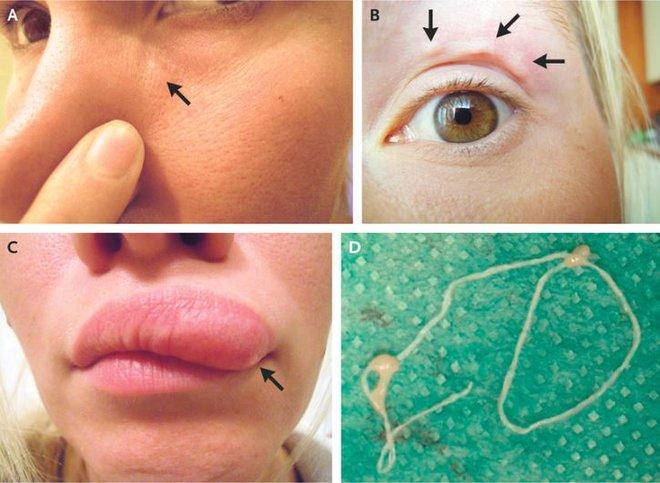 When a woman in Russia noticed a small lump under her left eye, she snapped a selfie to document the unusual bulge. Then, something even stranger happened: The lump moved.

In a series of selfies, the woman tracked the mysterious lump as it moved across her face. Five days after she first noticed the lump, it migrated to above her left eye. Then, 10 days later, it moved to her upper lip.

Soon after the lump's latest migration, the 32-year-old woman went to an eye doctor, who also observed a "superficial moving oblong nodule at the left upper eyelid" — in other words, a lump — according to a new report of the case, published today (June 20) in The New England Journal of Medicine.

It turned out that the woman had an infection with a type of parasitic worm called Dirofilaria repens. These thread-like worms naturally infect dogs, cats, foxes and other wild mammals, and typically live in the tissue under the skin, according to a 2011 report of a similar case. Humans are "accidental" hosts — in other words, not where the worms want to end up — and once a worm gets into a human, it typically can't reproduce.

The worms are spread by mosquito bites, and human cases have been reported in parts of Europe, Asia and Africa, the 2011 report said. The Russian woman said she had recently traveled to a rural area outside Moscow and was frequently bitten by mosquitoes, according to the new report.

Dr. Vladimir Kartashev, a professor of medicine at the Rostov State Medical University in Rostov-na-Donu, Russia, who treated the Russian patient, said that since 1997, there have been more than 4,000 human cases of this infection in Russia and Ukraine. And human cases have been on the rise in recent years. According to a 2015 study by Kartashev and colleagues that reviewed data on Diroﬁlaria cases in Russia and Belarus, the number of reported cases increased from eight in 1997 to nearly 200 cases in 2012. In addition, during the 16-year study period, the disease "spread" northward, with people becoming infected at higher latitudes in 2013 than in 1997.

In humans, the parasitic infection usually shows up as lumps beneath the skin, and sometimes, the lumps — or rather, the worms — move around.

According to a 2014 study of more than 200 cases of D. repens infection in Russia (which were documented over a 17-year period), doctors observed the worm moving in about 35 percent of patients. Some patients reported "a feeling of 'crawling' under the skin," that 2014 study said.

As horrifying as this sounds, the treatment is relatively simple: Surgically removing the worm can cure the infection, according to the new report.

Indeed, the Russian woman had the worm removed and made a full recovery, the report said.