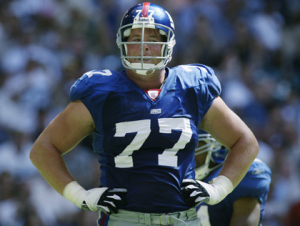 (CBS/AP) NEW YORK - Luke Petitgout, a former NFL player, has been arrested on a charge he hit his wife and shoved her from a moving car in New York City.

Police say he struck his wife with her pocketbook and then tossed her from the car.

His wife took a taxi to a police station and filed a report. He was arrested on an assault charge.

Petitgout is in police custody awaiting arraignment and can't be reached for comment. It's unclear if he has a lawyer.

The 37-year-old Petitgout played college football for Notre Dame. He spent eight seasons with the Giants and one season with the Buccaneers, who released him in 2008.