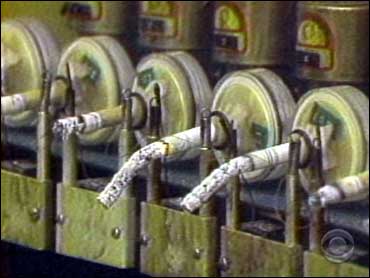 A government agency did a sharp about face Tuesday, and admitted the test it used to show those cigarettes are low in tar is meaningless. The FTC had endorsed the test for four decades, and during that time, the number of Americans smoking low-tar cigarettes grew from about one and 500,000 to more than 49 million. Now, as CBS News transportation and consumer safety correspondent Nancy Cordes reports, it looks like the low-tar claim has gone up in smoke.

Ever since the 1960s, cigarette makers have tried to seduce smokers worried about their health with products labeled "light," "mild" or "low-tar." They've been basing such claims on mechanical tests that measure tar and nicotine levels.

Today, 42 years after it endorsed those tests, the federal government essentially called them … bogus.

It said the tests "do not provide meaningful information on the amounts of tar and nicotine smokers receive from cigarettes." It's a conclusion scientists reached seven years ago when they found the tests were easily and frequently manipulated.

Now the Federal Trade Commission wants tobacco companies to remove its stamp of approval for those tests from their ads and packaging.

The proposal could open the door for the FTC to sue companies that call their products "light" or "low tar," implying they're somehow safer, Cordes reports.

Matt Myers with the Campaign for Tobacco-Free Kids says studies show more than half of all smokers still mistakenly believe that switching to cigarettes with slogans like "light and luscious," will reduce their risk of getting sick.

"The FTC hasn't banned the term 'light' and 'low tar.' But it has put tobacco companies on notice. If they use those terms or the tar and nicotine numbers they risk lawsuit by the federal government," Myers said.

There is a bill working its way through Congress that would ban the terms "light" and "low-tar" outright. We asked the tobacco companies what they thought about this new proposal.

Their response? "We're studying it."