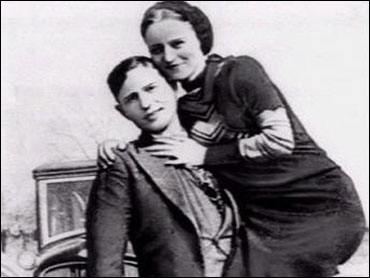 Warren Beatty and Faye Dunaway as gang leaders caused quite a stir with their movie portrayals of Bonnie and Clyde back in 1967 - nothing like the ruckus created by the REAL Bonnie and Clyde, the young outlaws who met their end 75 years ago. Our Don Teague tells the story:

It's real simple, it's a love story ... but not your typical love story. And far from simple.

This is the story of Bonnie and Clyde, the infamous couple behind one of the most notorious crime sprees in American history.

"They were just two kids who fell in love and fell off the wrong side of the law's fence, and that was what it was," said Boots Hinton, who runs the Bonnie and Clyde Ambush Museum.

What it was, was a two-year long, multi-state rampage.

From 1932 to 1934, Bonnie Parker and Clyde Barrow were perhaps the best-known outlaws in the United States, equals of the likes of Pretty Boy Floyd and John Dillinger.

"The history, the mythology is that, 'Oh, they were sort of Robin Hood thieves, rob from the rich, gave to the poor.' And that is not true," said author Jeff Guinn.

They may not have been Robin Hoods, but they were legends ... lovers. With their gang, they robbed and killed their way through the central United States. Bonnie and Clyde stole money, cars, and guns. Their targets were mostly gas stations and mom-and-pop stores. Eight lawmen would die at the hands of the Barrow gang.

Their fame grew with every new victim and with each escape from the law.

"The media was eating it up," said Buddy Barrow Williams, Clyde's nephew. "And law enforcement were looking kind of, you know, like they're really failing their job. But that's what made Clyde so famous, 'cause he was so elusive." 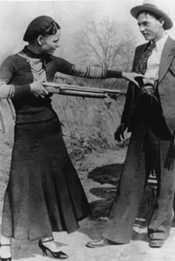 (AP Photo)
And then there were the snapshots ... rolls of film found by police after a shoot-out in Joplin, Missouri. They looked very much in love ... Bonnie playfully posing with a cigar - and a gun. Footloose, and seemingly carefree.

"There are these scandalous pictures, these amazing pictures, which immediately appear in the Joplin newspapers, and then, thanks to the wire services, all over the country," said Guinn, author of "Go Down Together; The True, Untold Story of Bonnie and Clyde." "Now, suddenly, almost overnight, the Barrow gang's no longer regional. They are national celebrities. It changed (snaps fingers) like that."

Bonnie and Clyde were front page news. They had traveled far, indeed ...

Clyde Barrow was the fifth of seven children. The expression "dirt poor" understates the way he grew up,

When he was a teenager, Clyde's family moved to West Dallas to a notorious slum called "The Bog." Guinn described this tent community:

"You could have thousands of people all along here. The Barrows, all these poor people pitching a tent, the Barrows don't even have a tent, they've got a wagon, and at night they would sleep under the wagon."

From their campsite, young Clyde could look across the Trinity River to downtown Dallas, to a life that was out of reach.

"What it must have been like at night when it was dark here and there's nothing but a few cooking fires, and then right across the river a couple miles away you see these gleaming skyscrapers with all these wonderful things … what kid wouldn't want more of that?" said Guinn.

To get more of that, Clyde turned to crime by the age of 16 … first, small-time thefts that barely got him noticed, except by police.

Then, at a party one night in 1930, he met another poor kid from West Dallas. She also wanted more. Bonnie Parker was tiny, cute and ambitious.

"It was apparently love at first sight," said Guinn. "They were both people who wanted other's approval. They wanted glamour, they wanted excitement. They found in each other the things they were looking for."

Not long after they met, Clyde went off to prison for car theft. Bonnie's mother begged her to forget him. But the couple vowed to stay together, forever.

"We wouldn't be talking about this if there wasn't a film out in 1967 about them," said Dan Zak, features writer for the Washington Post.

(Warner Brothers)
He's right. Most of us know about the exploits of Bonnie and Clyde from the Arthur Penn-directed movie starring Warren Beatty and Faye Dunaway (left).

"The fact that it was a man and a woman and they were young and they were actually in love in real life, you know, you can build a whole movie around that," said Zak. "We've been doing that for, you know, over 100 years: Building movies around two people in love. And it's not something we ever are going to tire of."

Still, don't believe everything you see in the movies. "You had this kind of cultural landmark that compressed their story into a matter of months, not years, and turned them into beautiful people who were flawed but still you could kind of get in there and root for them," said Zak.

But you won't find any fans of the film among descendants of Clyde Barrow. They know the real story.

"Nothing glamorous about it, period," said Buddy Williams. "Always looking over your shoulder. What money you're gonna get, where you gonna spend it? Where you gonna go? I mean, you're just like a hunted, you know, animal."

Which bring us to this man: Retired Texas Ranger Frank Hamer. Hamer's mission: Bring 'em in, dead or alive.

"Hamer himself used the power of mythology and was this huge man for those days ... 6'2", 6'3", weights over 200 pounds," said Guinn. "He calls his gun 'Old Lucky. His gun is famous. And he claims in interviews he can see a bullet in flight. And he can hear a crack of thunder thirty seconds before anybody else can."

Hamer tailed his prey for months. Then, in the spring of 1934, he had them cornered.

It happened in a small town 45 miles east of Shreveport. Until that day, Gibsland was perhaps best known as Louisiana's daffodil capital.

Today, it's home to not one, but two museums dedicated to the legend of Bonnie and Clyde, and the events of May 23, 1934.

Bonnie and Clyde were alone that morning as they drove south out of Gibsland to pick up a member of their gang. What they didn't know was they were driving into an ambush. When their car reached the top of a hill, a posse of six law enforcement officers opened fire from the trees.

(AP Photo)
They fired more than 140 shots in a matter of seconds.

Olen Jackson runs Gibsland's original museum, but that's not his real claim to fame. Jackson was 23 when he heard those 140-odd shots that morning.

"When they got shot, I was plowing in the fields and I got me a drink of water," he said. "Plug plug plug, I heard 'em. 'Hot dog,' I says, 'that sucker sure can set off some dynamite!'"

A couple of doors away is the Ambush museum run by Boots Hinton. He, too, has a claim to fame: He's the son of Ted Hinton, a member of Frank Hamer's posse. According to his dad, the man who opened fire on the duo was Prentiss Oakley. "Fired the first two shots, bull barrel 35 Remington - hit Clyde right there. That was it," said Boots.

Film shot by Ted Hinton immediately after the ambush shows the bullet-riddled car, their arsenal of weapons, and the limp bodies of 24-year-old Clyde Barrow and Bonnie Parker, just 23.

"Ted had a sayin', he said, 'It puts Romeo and Juliet to shame,'" recalled Hinton.

They died together, but Bonnie Parker and Clyde Barrow would be buried apart, in separate Dallas cemeteries.

Bonnie's mother made good on her vow that, even though he'd had her in life, Clyde wasn't going to have her daughter in death.

Even so, when we remember Clyde Barrow ... Bonnie Parker is at his side.