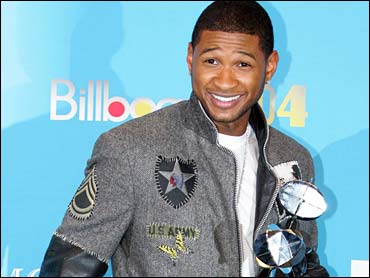 Usher dominated the Billboard Awards from the moment he opened the show by dropping from the ceiling until the evening's final tally, when he counted up 11 awards to lead all contenders.

The 26-year-old singer opened the show with a blast, dropping in on a cord to perform "Bad Girl" while a bevy of beautiful women clad in white parkas, briefs and snow boots gyrated around him.

Usher, whose album sold more than 1 million copies in its debut week, also had a big night at last month's American Music Awards and is nominated for eight Grammys Awards.

R&B crooner Alicia Keys picked up seven awards during Wednesday's show, which was held at the MGM Grand hotel-casino. Keys took home wins for female artist of the year, R&B/hip-hop single of the year for "If I Ain't Got You" and Hot 100 songwriter of the year.

Kanye West, who has a leading 10 Grammy nominations, picked up four Billboard awards, including rap artist of the year. 50 Cent won a new award, cell phone ringtone of the year, for "In Da Club."

The show was hosted by Ryan Seacrest of "American Idol" fame and broadcast by the Fox television network. Billboard Award winners are determined by the magazine's year-end chart listings, which are based on record sales and airplay.

The high-energy affair mixed R&B and rock with performances by Nelly, Green Day and Gwen Stefani. It also included the first public appearance by Britney Spears since she married Kevin Federline in September; she presented West his rap artist of the year award.

Ashlee Simpson was met with boos and cheers as she accepted the female new artist of the year award. Simpson, the younger sister of Jessica Simpson, ended her speech saying that if people ever feel nervous they can do a "Texas jig," referring to her impromptu dance during an October appearance on NBC's "Saturday Night Live," when an audio mistake made it clear she had been lip-synching.

Stevie Wonder, who presented Sting with the Century Award last year, was himself the recipient this year.

Mary J. Blige, Diana Ross and Destiny's Child performed some of Wonder's greatest hits. Producer Quincy Jones, who presented the award, told Wonder, "No words can ever truly capture the ... wonderful spell your music casts over us."

"Sometimes you forget all you've accomplished. Sitting in those seats I feel so blessed for all we have done," she said.