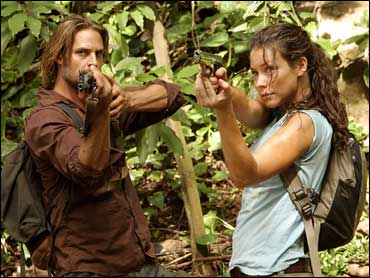 Mostly excellent, all of them memorable, here are the decade's Top 10 television achievements as tapped by the TV writers of The Associated Press.

In no particular order, they are:

- "CSI: Crime Scene Investigation" (premiered October 2000) and the franchise it inspired. This drama was already a surprise hit when, with season two, it emerged as a reassuring response to the sorrows and anxieties of 9/11. The Las Vegas-based investigators functioned with a clinical detachment from evil and evildoers, while insisting that truth and justice await those who pursue it with keen-eyed devotion. That was just the sort of reminder viewers needed. And apparently still do, with "CSI" remaining a powerhouse, along with its spinoffs, "CSI: Miami" (premiered September 2002) and "CSI: NY" (September 2004), where science and reason (plus blood and guts) prevail.

- "The Daily Show With Jon Stewart" (yes, we know he came aboard in 1999) and "The Colbert Report" (premiered October 2005). Weeknights on Comedy Central, this one-two satirical punch helps keep viewers abreast of all the foolishness they suffer at the hands of the media - and at the hands of newsmakers the media cover.

- "Survivor" (premiered May 2000). It began with personalities such as Rudy, Richard Susan and, of course, host Jeff Probst, on an island near Borneo. Now, 18-and-counting editions later, CBS' "Survivor" doesn't just endure as the pioneer of TV reality-competition, it prevails as the gold standard.

- "High School Musical" (January 2006). If "American Idol" didn't get the nation singing, this shockingly popular Disney Channel film did - that is, the nation's teens and tweens, who, along with gorging on the original film and its sequels (with a fourth installment due next year), have put on a high school musical themselves in seemingly every auditorium in the land.

- "The Osbournes" (2002-05). Poor addled Ozzy couldn't even handle his TV remote. But viewers were able to operate theirs, and, switching to MTV in droves, they made a huge hit out of this rock star's kookie family life. Meanwhile, its wild success crystallized a new sub-genre of reality TV, populated by the likes of Tommy Lee, Victoria Gotti, Danny Bonaduce, Hulk Hogan, Whitney Houston and so many more: Celebrities masquerading as themselves while they pretend their act isn't just another slice of show biz.

- "The Sopranos" (1999-2007). Yes, it started before the millennium, but genius doesn't always arrive at a turning point, but, instead, is one. Anyway, most of "The Sopranos" aired in 2000 and beyond - including the infamous, maddening blackout finale, which, all by itself, guaranteed this HBO mob drama a place in pop-culture perpetuity.

- "The Shield" (2002-2008). No drama series reached further with a surer hand, week after week. Consistently absorbing, exciting and disturbing, this LA-based cop show remade the image of its network, FX, kick-started the career of its star, Michael Chiklis, and proved that basic cable could compete not only with the premium channels, but also with the best of cinema. Thanks to "The Shield," viewers were given notice not to accept anything less.

- "Arrested Development" (2003-06). A send-up of human vanities, greed and corruption, this Fox comedy about the unlikely Bluth clan stayed amusingly askew, pokerfaced and absurd. It could claim neither long-term nor widespread success, but there was something groundbreakingly demented about it. Charting new ground, it prepared the way for oddball comedies to come, such as "The Office" and "30 Rock." The Bluths were comedically bent trailblazers.

- "Lost" (premiered September 2004). From its first episode (the dreadful plane crash on the island), this ABC drama demonstrated an epic, mind-bending sweep through time and space, with a vast array of characters. It doesn't always make sense (though maybe it will, with the series finale next year), but "Lost" has made one thing clear: With serialized TV, nothing is too way out or ambitious.