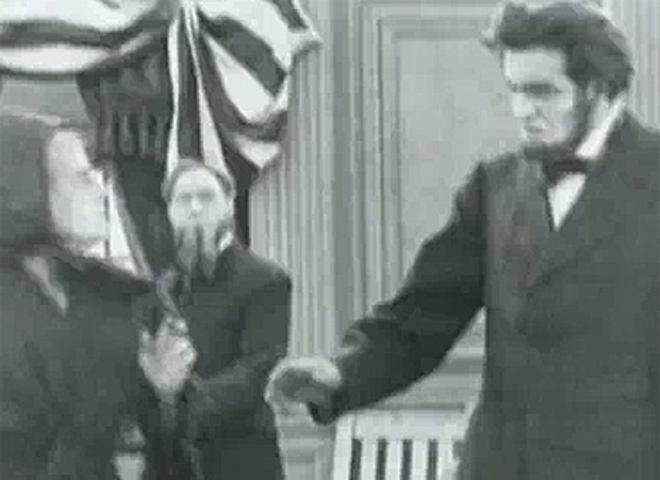 A contractor cleaning out an old New Hampshire barn he was about to demolish found the only known copy of a 1913 silent film about Abraham Lincoln.

"When Lincoln Paid" was directed by and starred Francis Ford, the older brother of famed director John Ford ("The Grapes of Wrath," "The Quiet Man").

Peter Massie came across a 35mm projector and seven reels of nitrate film when he was clearing out the old barn. He gave the reels to the Film Society at Keene State College, which eventually determined that the film didn't exist in film archives.

It was one of eight silent films in which Francis Ford played Lincoln; none of the others has survived.

According to the Internet Movie Database, Francis appeared in more than 400 films in all, and directed 175 films between 1912 and 1928. His work is considered an influence on her better-known, Oscar-winning brother.

Keene State film professor Lawrence Benaquist told The Union Leader the barn near Granite Lake in which the reels were found had served as a summer camp for boys in the 1920s. It is possible the films were rented to be shown there and never returned.

Although the film has minimal scratches, it was missing footage and its perforations were damaged.

Film historian Mark Reinhart, who possessed a videotape of a missing 8mm version of the film, helped to piece together missing scenes. A Colorado lab has since restored the film, with support and financial assistance provided by John Ford scholar Tag Gallagher, the National Film Preservation Foundation, and the George Eastman House in Rochester, N.Y.

In addition to battle scenes between Union and Confederate forces, the film's plot includes the mother of a dead Union solider requesting that Lincoln pardon a Confederate soldier whom she had initially turned in.

Lost for decades, the restored 30-minute film will be presented at a free screening at the college's Redfern Arts Center on Tuesday, April 20.