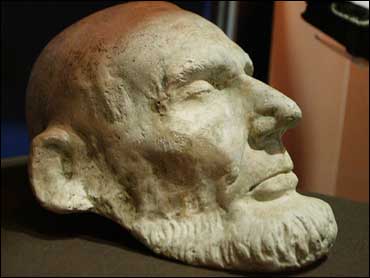 Artists, sculptors and photographers knew Abraham Lincoln's face had a good side. Now it's confirmed by science.

Laser scans of two life masks, made from plaster casts of Lincoln's face, reveal the 16th president's unusual degree of facial asymmetry, according to a new study.

The left side of Lincoln's face was much smaller than the right, an aberration called cranial facial microsomia. The defect joins a long list of ailments — including smallpox, heart illness and depression — that modern doctors have diagnosed in Lincoln.

Severe strabismus leads to double vision and can be treated today by surgery.

"Lincoln noticed double vision only occasionally and it did not bother him a great deal," said Fishman, a retired Washington, D.C., ophthalmologist and history buff.

Most people's faces are asymmetrical, Fishman said, but Lincoln's case was extreme, with the bony ridge over his left eye rounder and thinner than the right side, and set backward.

Lincoln's appearance was mocked by his political enemies, historians say. The author Nathaniel Hawthorne, a Lincoln fan, wrote of the president's "homely sagacity" and his "sallow, queer, sagacious visage." Hawthorne's description was deemed disrespectful and deleted by a magazine editor, said Daniel Weinberg, owner of the Abraham Lincoln Book Shop in Chicago.

When Lincoln was a boy, he was kicked in the head by a horse. Laser scans can't settle whether the kick or a developmental defect — or neither — contributed to Lincoln's lopsided face, Fishman said.

The scanning technique is usually used to create 3-D images of children with cleft lip and palate before and after surgery. Fishman teamed up with Dr. Adriana Da Silveira, an Austin, Texas, orthodontist who specializes in children with facial defects, to scan a bronze and a plaster copy of two life masks, owned by the Chicago History Museum.

Life masks were in vogue in the 1860s, said James Cornelius, curator at the Lincoln Presidential Library in Springfield, Ill.

Lincoln cooperated with sculptors to make them twice, in 1860 before his first presidential nomination, and in 1865, two months before his assassination. Lincoln probably did it for political purposes more than posterity, Cornelius said.

"It's the equivalent of TV face time now," Cornelius said.