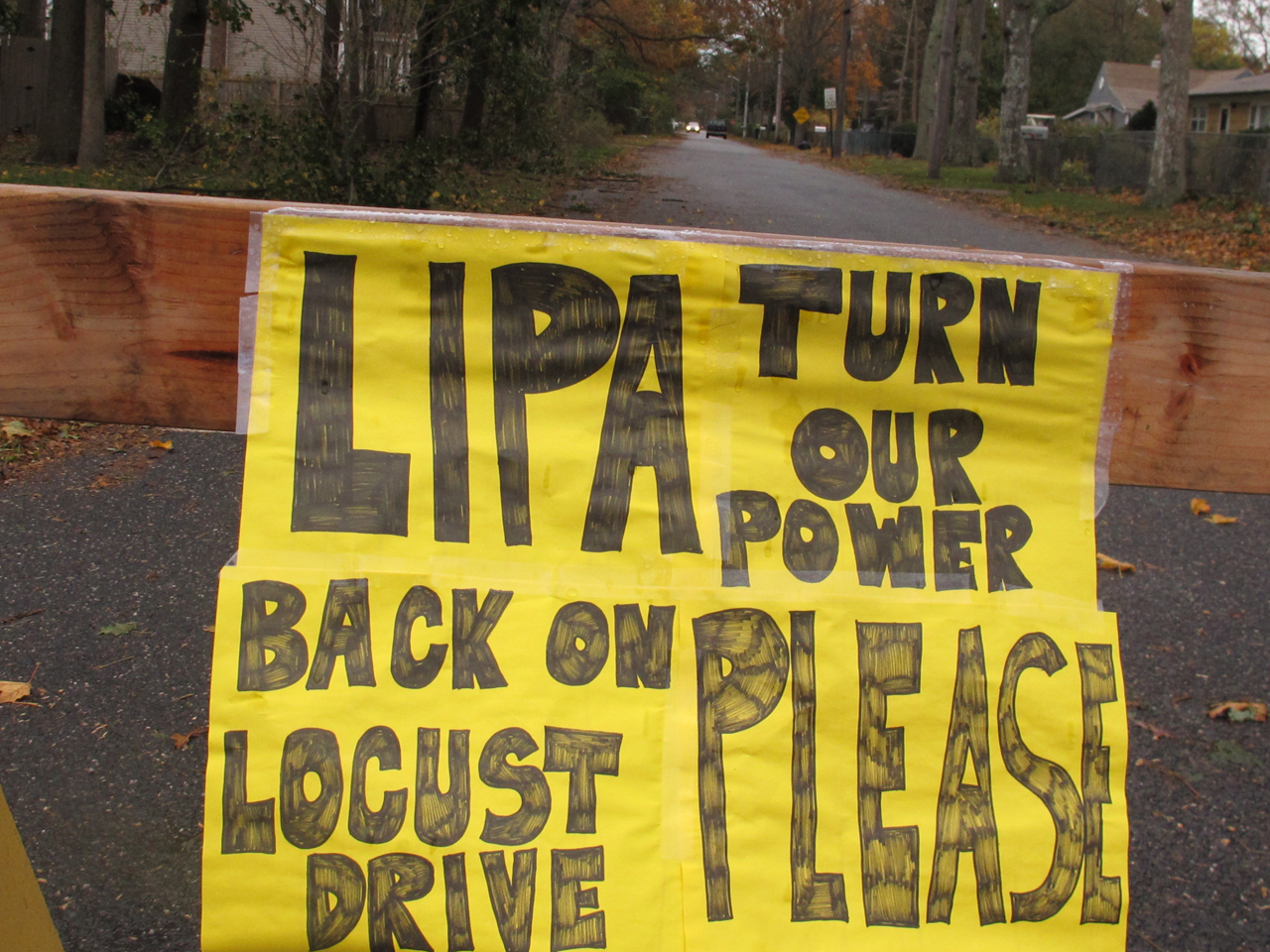 NEW YORK As the power outages on Long Island drag on, New Yorkers railed Sunday against the utility that has lagged behind others in restoring power, criticizing its slow pace as well as a dearth of information.

The lack of power restoration for a relative few in the densely populated region at the heart of the storm reinforced Sandy's fractured effect on the area: tragic and vicious to some, merely a nuisance to others.

Perhaps none of the utilities has drawn criticism as widespread, or as harsh, as the Long Island Power Authority. About 76,000 of the homes and businesses it serves were still without power early Monday.

As outages enter their third week, LIPA said it has dropped its policy that forces customers to get a house inspection before their power is restored, CBS Station WCBS reports.

"That should help those homes get power more quickly and one less step for the homeowners," said Michael Hervey, the utility's Chief Operating Officer.

But some residents say that's not enough.

"We sleep with insulated underwear, sweatpants, sweatshirts and three quilt covers," said Marilyn Cashdan from Baldwin Harbor. "No one cares about us."

LIPA has acknowledged that customers aren't getting the information they need about restoring power partly because of an outdated information technology system that it is updating. Executives said Sunday they were working on setting up information centers near the most heavily-damaged areas.

"We certainly understand the frustration that's out there," Hervey said in a conference call late Sunday. But he added that the storm had been worse than expected, and the power was coming back rapidly "compared to the damage that's been incurred."

"'They're working on it, they're working on it' - that would be their common response," Nassau County Executive Ed Mangano said Sunday, describing LIPA's interaction with his office. He said LIPA has failed to answer even simple questions from its customers and that the magnitude of the storm wasn't an excuse.

In New Jersey, PSE&G reports 99.9 percent of the 1.7 million customers impacted by Sandy have had their power restored. In a press release the utility said 19 customers remain without power, and 259 customers affected by last week's nor-easter remain without service.

Jersey Central Power & Light has restored power to all but 3,345 customers by Monday morning. The utility said customers on barrier islands along the Jersey shore will be without power indefinitely because homes there are too damaged to have electricity restored and are currently uninhabitable.

The lack of power has proven dangerous in many ways. Police say a New Cassel, N.Y., woman poisoned her family with toxic fumes by running a generator inside her house.

Newsday reports that 45-year-old Judith Edouard-Neus was arraigned Saturday on charges including reckless endangerment, after bringing a generator into her home on Friday and turning it on before leaving for work.

Police said say that when she returned home, her four children aged 1, 3, 5 and 7 were dizzy and vomiting. There were also two women in their 70s in the home, one of whom was unconscious. The victims were taken to hospitals for treatment.

"The Last Big Chunk" to Solve on Staten Island

Napolitano said "a lot of progress" had been made since the storm hit and especially since her last visit 10 days earlier. "It seems like a different place," she said. "You can really tell the difference."

But, she added, there was a lot more to do. "The last big chunk" to solve, she said, is the question of how quickly power can be returned to thousands of homes without it.

If homes are not inhabitable even after power returns, she said, the government is finding temporary apartments and hotels where evacuees can stay - preferably in the same community so kids can continue going to the same schools.

Most of Hoboken, N.J., finally had power back Sunday night, but a major cleanup was in order, with even the mayor's home in a mess and the city's popular bars nowhere near ready to reopen.

On a normal Sunday, the Nag's Head Pub would be packed with locals watching football. But two weeks after the storm, it was full of dust; Owner Ruth Finnegan spent the day sanding down barstools, trying to rid them of the muck left behind by floodwaters. Inside, construction workers replaced warped floors and walls.

The beer taps were silent, and so was the cash register.

"Our bartenders are not earning money. They have to pay their rent. We have to pay our mortgage," Finnegan told WCBS correspondent Drew Levinson. "There's no money coming in, so we have to get ourselves up and going as soon as possible."

Meanwhile, Hoboken brought out an extra dozen garbage trucks to get rid of the rising trash piles. On average, the city's sanitation trucks collect 62 tons a day. Since the hurricane, it has risen to 309 tons.

More Public Transit Back on Track

He says the Long Island Rail Road will run on a weekday schedule Monday on 10 of its 11 branches. That's as two Amtrak tunnels under the East River reopen after being flooded during Superstorm Sandy.

Train service on the Long Beach Branch will remain suspended, with bus connections between Long Beach and Lynbrook starting at 5 a.m.

Amtrak said Sunday that, after having drained more than 3 million gallons of salt water from Hudson River and East River tunnels, it was instituting limited service between New Jersey and New York City in both directions, at about 63 percent of normal weekday capacity.

Cuomo also said the Hugh L. Carey Tunnel (commonly known as the Brooklyn-Battery Tunnel), which was flooded during he storm, will reopen for limited rush-hour service for buses only.

PATH train service between Manhattan and the Newark Penn and Harrison stations in New Jersey resumed Monday morning. Officials said trains will run in both directions until 10 p.m. But they also warn commuters that they may face extended waits for trains.

Besides Newark Penn and Harrison, the line also will include stops at Journal Square, Grove Street, and Newport stations in New Jersey and at the 14th, 23rd and 33rd Street stations in Manhattan. Trains will bypass Christopher and 9th streets in New York.

New Jersey Transit is offering more limited service on the rails. The Morris & Essex lines, including Midtown Direct, Bergen and Port Jervis, are operating. However, service remains suspended along the Gladstone Branch and Montclair-Boonton Lines. NJ Transit is encouraging rail passengers to continue to use buses and ferries.