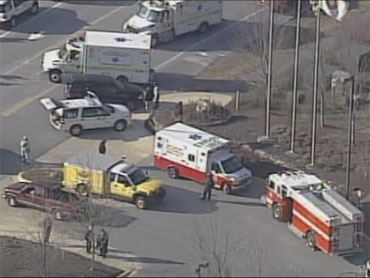 ANNAPOLIS - Two mail packages caused some kind of incendiary reaction when opened, burning the fingers of two employees in separate incidents at two state office buildings in Maryland at almost the same time Thursday afternoon. Officials say there is no apparent connection to any domestic terror group and that the mailings appear to be from an angry individual who has a specific grudge against the Maryland State government.

Investigators suspect the small devices were sent by someone, angry over Maryland road signs, asking motorists to report suspicious activity.

Part of a note enclosed with one of the packages read: "Report suspicious activity...total bullsh**...you have created a self-fulfilling prophecy. Signed, X"

The scare caused the evacuation of 300 people.

CBS News Homeland Security Correspondent Bob Orr reports that both packages were sent through the mail, and that law enforcement officials are not calling them bombs. The State Fire Marshall's office reported finding no explosive material in either.

"When both packages were opened there was a reaction that caused a flash of fire, a brief flash of fire, smoke and a smell," state police spokesman Greg Shipley told the Associated Press. "This is not to be compared with a significant explosion that you think of when you say that word."

Sources say the devices may have used matches as igniters.

Shipley said the packages were small, about the size of a book. One had five holiday stamps.

CBS News has learned that one of the packages was addressed to Governor Martin O'Malley at the Governor's mansion but was taken to the state offices at the Maryland Department of General Services' Jeffery Building in Annapolis.

According to one law enforcement source, a note was recovered from one of the packages. The source did not have information on what was written on the note or if it was handwritten or typed.

The package addressed to the governor, which injured a mailroom employee, "spit a little flame and smelled of sulfur," when opened the governor told the The Baltimore Sun.

"The employee sustained minor stinging to his fingers, but refused further medical treatment," the Maryland State Police said in a news release about the incident, which occurred around 12:30 p.m, the Sun reports.

The state government has locked down all of its mailrooms, according to a bulletin from the Maryland Department of Transportation, reports the Sun.

The Jeffrey Building includes a number of gubernatorial staff offices, including the Office of Homeland Security, the appointments office, the secretary of state and StateStat, the Sun reports.

The other explosion occurred at around 1 p.m. in the mailroom of the Maryland Department of Transportation headquarters in Hanover, Md., reports WBAL radio in Baltimore.

Law enforcement sources tell CBS News that "one device flamed and the other fizzled."

Only two packages, which both ignited, are linked to the same sender. Police have checked out other "suspicious" packages that have turned out to be false alarms.