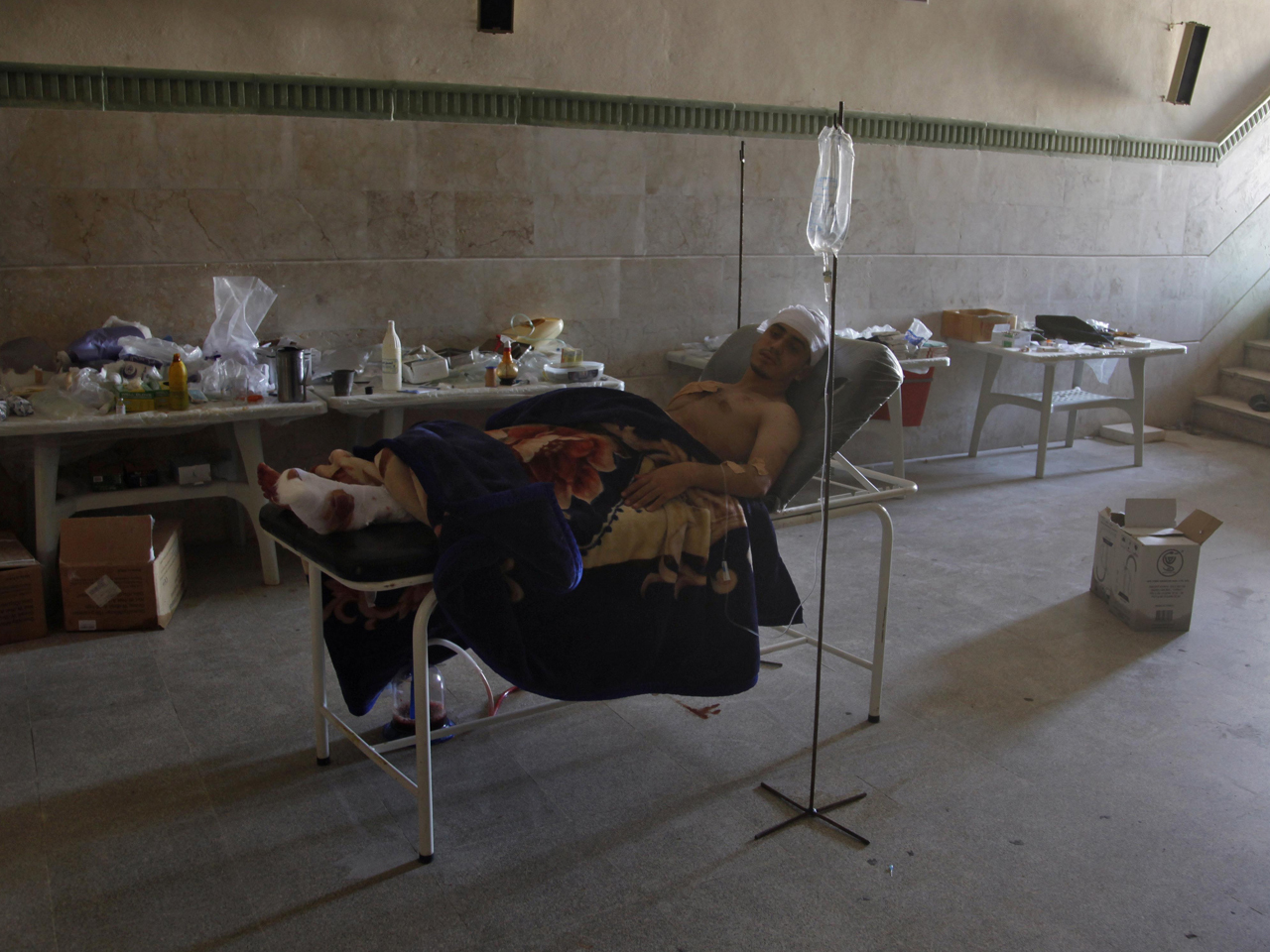 (AP) ANADAN, Syria — The guards pulled him from his cell before dawn on Monday, bound his hands, blindfolded him and drove him to an empty lot in the Syrian city of Aleppo. They sat him in a row with 10 other captives, he said, then cocked their guns and opened fire.

"They sprayed us," recalled 21-year-old Mahmoud, the lone survivor of the latest mass killing of Syria's civil war. "The first bullet hit my chest, then one hit my foot, then my head. As soon as my head got hit, I thought, `I'm dead."'

Reports of such killings have surfaced frequently during the 17 months of deadly violence that activists seeking to topple President Bashar Assad say has killed more than 19,000 people. But details are usually scarce — no more than activist reports or amateur videos of bloodied bodies or mass graves posted on YouTube.

Mahmoud related his grisly ordeal to The Associated Press hours after it happened. Struggling to speak, he lay in a bed in a makeshift rebel-run field hospital set up in a wedding hall in this town 13 miles north of Aleppo. Bandages covered his foot, head and chest. Plastic vines and colored lights adorned the walls of the darkened building, and two red velvet chairs once used by brides and grooms sat on a small stage.

Mahmoud gave only his first name to protect his family who still live in the area.

While his story could not be independently confirmed, Mahmoud's wounds matched his story and residents who found him and his dead colleagues corroborated certain details.

Together, they painted a picture of the summary slaying of 10 men, at least some of whom had only loose links to the armed rebels seeking to topple the regime. That story jibes with activist claims of the increasingly brutal tactics regime forces are using to try to crush the rebellion that has spread to Aleppo, Syria's largest city.

Syria's uprising started in March 2011 with peaceful protests calling for political reforms that were met with a fierce regime crackdown. Government brutality grew as dissent spread, and many in the opposition took up arms as the conflict morphed into a civil war.

Aleppo has been a stronghold of government support throughout the uprising, with a wealthy business class and many minority communities who fear they'll suffer if Assad falls. Until recently, the city of some 4 million people had been spared the violence that has ravaged other Syrian cities.

But during the last two weeks, rebels have been pushing into Aleppo's neighborhoods, clashing with security forces and torching police stations in a push to "liberate" the city. Syrian media has vowed the army is gearing up for a "decisive battle," while anti-regime activists have reported swelling numbers of troops and tanks on the city's edges.

The Syrian government blames the uprising on armed gangs and terrorists backed by foreign powers that seek to weaken Syria.

It was amid these tensions that Mahmoud, a Palestinian resident of Aleppo, had his fateful brush with Syrian security. On Thursday, Mahmoud said, he and a friend went to collect their paychecks from the thread factory where they work and heard clashes nearby. Soon eight men in civilian clothes stopped them and asked for their IDs and cell phones.

On Mahmoud's phone they found videos of anti-government demonstrations and messages he sent to rebels from the Free Syrian Army, asking God to protect them and make them victorious. The men threw Mahmoud and his friend in the trunk of a car and drove them to a trash dump, where they were blindfolded, bound and beaten with sticks and large rocks before being taken to a security office.

Mahmoud was locked in a crowded cell with about a dozen other men, he said. Each day, some were taken out and new ones brought in.

Before dawn on Monday, guards pulled Mahmoud and 10 others from their cells and told they were going to see a judge. They were bound at the wrists, blindfolded and driven to Aleppo's Khaldiyeh neighborhood, where they were lined up on a patch of rocky soil.

Mahmoud was shot three times. Bullets pierced his chest and foot and one grazed his skull. Minutes later, silence returned, and he realized he was still alive.

"I breathed, I said the shehada," he said, referring to the Muslim declaration of faith meant to put him right with God. "I tried to get up then started screaming because blood was coming out of me."

He scraped his face on a rock to remove the blindfold and crawled to where some nearby residents found him.

Among them was a 22-year-old electrician who said he heard the gunfire early Monday and worried that people were being killed because he had discovered six bodies in the same spot a day earlier. He showed videos of the victims on his cell phone, their bodies piled atop each other covered in blood, some bearing large bruises that appeared to be from beatings. He said all had been shot dead.

He and others asked not to have their names published because they have to pass through government checkpoints to get home.

The killings shocked residents of Khaldiyeh, a working-class neighborhood on Aleppo's northwest side that has seen little violence until now. While many residents support the rebels, they have not established a foothold in the area, and the relative quiet has drawn thousands of people fleeing violence in other Aleppo neighborhoods or nearby villages.

As Mahmoud spoke, a white pickup pulled up outside the field hospital with the bodies of nine of the men killed Monday. The body of the tenth victim had been taken away by his family. All still had their hands bound and two still wore blindfolds. Two had bullet wounds to their heads, and others had blood on their faces and chests or coming out of their ears. None wore shoes.

Those killings convinced one Khaldiyeh resident who helped collect the bodies that the neighborhood needs arms.

"We want the Free Army to come to our neighborhood to protect us," he said. "If they can't come, then they need to give us weapons so we can defend ourselves."

The field hospital's doctor, Mohammed Ajaj, said he is no longer shocked when the dead and wounded pass through town on their way to burial in nearby villages or for treatment across the northern border in Turkey.

An 18-year-old activist who helped collect the bodies said none of them had IDs.

"We really know nothing about them," he said, adding that he would stop in neighboring villages to see if anyone recognized them before delivering them to a morgue further north.

"If nobody claims them, we'll take their photos and put them on our Facebook page so their families can find out that they're dead," he said.