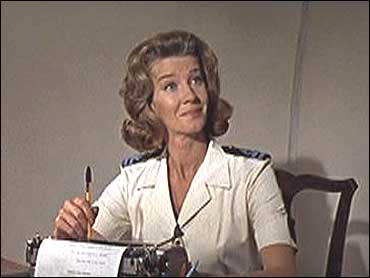 Lois Maxwell, who starred as Miss Moneypenny in 14 James Bond movies, has died, the British Broadcasting Corp. reported Sunday. She was 80.

The Canadian-born actress starred alongside Sean Connery in the first James Bond movie, "Dr. No," in 1962 as the secretary to M, the head of the secret service.

She died Saturday night at Fremantle Hospital near her home in Perth, Australia, the BBC cited a hospital official as saying.

Bond star Roger Moore said she was suffering from cancer.

"It's rather a shock," Moore, who had known her since they were students at the Royal Academy of Dramatic Art in 1944, told BBC radio.

"She was always fun and she was wonderful to be with," he said.

Born Lois Hooker in Ontario, Canada, in 1927, she began her acting on radio before moving to Britain with the Entertainment Corps of the Canadian army at the age of 15, the BBC said.

In the late 1940s, she moved to Hollywood and won a Golden Globe for her part in the Shirley Temple comedy "That Hagen Girl."

After working in Italy, she returned to Britain in the mid-1950s.

In addition to her 14 appearances as Miss Moneypenny, she also acted in Stanley Kubrick's "Lolita" and worked on TV shows including "The Saint," "The Baron, Randall and Hopkirk (Deceased)," and "The Persuaders," the BBC said.

She was 58 when she appeared in her final Bond film, 1985's "A View To A Kill." She was replaced by 26-year-old Caroline Bliss for "The Living Daylights."

Her last film was a 2001 thriller called "The Fourth Angel," alongside Jeremy Irons.