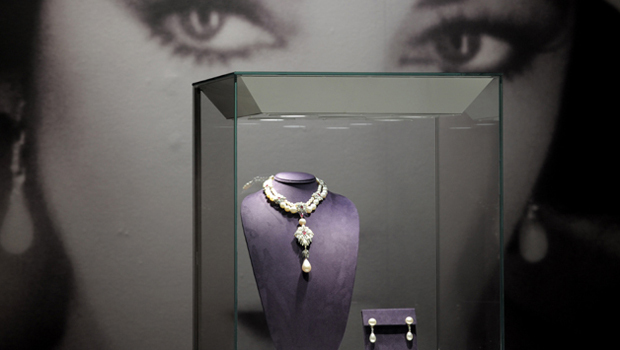 It's one of the richest, most extravagant auctions you'll ever see. The best of Elizabeth Taylor's famous jewelry was sold off Tuesday night, setting a world record for a single collection.

More items from Taylor's estate were to go on sale Wednesday at Christie's auction house in New York. And if you're thinking of bidding, you'd better have deep pockets.

The collection has already brought in a record $116 million. And nearly every sale far surpassed its estimated price.

"Early Show" contributor Katrina Szish got a first-hand look at the auction, which will continue until Saturday.

Taylor's historic 50-carat pearl alone sold for nearly $12 million. And one of the crown jewels of her estate -- the Krupp diamond ring Richard Burton bought her -- sold for almost $9 million.

The 33.19-carat Krupp ring is iconic, and experts have rated it potentially flawless.

"There's no nitrogen in this stone at all," Brett Sherlock, vice president of the Christie's Toronto office, said of the diamond. "It's like a drop of Fiji water."

Worn by the actress almost daily for 40 years, the diamond was a gift from the man Taylor married twice, actor Richard Burton. The occasion? Just because it was a Tuesday!

"Elizabeth referred to (the stone) as steps into eternity," Sherlock said.

The historical piece, Sherlock explained, was discovered more than 400 years ago by a slave in the Bay of Panama. It was once part of the crown jewels of Spain -- and the Bonaparte Family.

But it actually sold for nearly five times that -- $10.5 million.

And Burton wasn't the only one who gifted Taylor. A bride eight times to seven different men, Taylor was showered with gems. Film producer Mike Todd -- husband number three-- gave her a tiara, along with other pieces, including a now-famous set of rubies.

"(Taylor and Todd) had been renting a chateau in the south of France," Sherlock said. "And Elizabeth, at the age of 21, had been swimming in the pool, doing laps, wearing the Mike Todd tiara, when Mike Todd arrived carrying red boxes. And we all know what red boxes mean. Cartier. There wasn't a mirror around, so Elizabeth used the reflection of the pool to see herself."

Szish asked Sherlock, "Did men compete when they gave her jewelry?"

"Well, it looks like they did. Didn't they?" Sherlock said.

A star before stylists were in vogue, the two-time Academy Award winner dressed herself -- and at just 5-foot-2-inches, Taylor was a standout.

"She was so beautiful with that dead black hair, those amazing eyebrows, the violet and gray and green eyes, and the wonderful mouth. It was such a definite look," Meredith Etherington-Smith, fashion curator at Christie's in New York, said. "She couldn't have -- no one else could be like that."

"I think that, for my money, the thing that makes me laugh the most was the outfit she wore to arrive at Heathrow, London's Heathrow Airport, just after she'd become a grandmother at the age of 37," Etherington-Smith said. "It is a pair of hot pants which are so short made out of white daisies. And she didn't have anything covering any of (it) and she -- you know, walked down the steps with knee-high, white patent leather boots. Now that, my dear, is style."

From caftans to diamonds, Taylor took impeccable care to preserve it all.

The sale of Taylor's entire collection over the four days was estimated to reach up to $50 million, but it's more than already doubled that. With close to 1,000 items up for sale, there's no telling how much her highly sought-after items will fetch.

And part of those sales will go to the Elizabeth Taylor AIDS Foundation, along with money going to Taylor's private trust.