Of course, not everyone can afford to build a dream house like William Randolph Hearst's. Still, John Blackstone tells us, that doesn't keep the dreamers from dreaming . . .

Seldom is an American's home ACTUALLY a castle. The American "Dream House" can take many shapes.

It can be a dramatic statement in glass and steel perched above the Pacific.

"People can't get this house out of their minds from the moment they see it," said John Saar.

Or a dream house can be inspired by the simple structure of a corrugated metal grain silo.

"Designing and building this house was one of the most fulfilling things I've done in my life," said Jonathan "Earl" Stein.

Even an old lighthouse on the Atlantic coast can have the makings of a dream house - looking due South out to open ocean and the Gulf of Maine.

Wherever it is, the location is often the first ingredient for a dream house, and few places offer the spectacular settings of Big Sur on the California coast.

You can't get closer to the edge of the continent than this.

John Saar is a real estate agent who specializes in Big Sur's multi-million dollar properties. This dream, call Terra Mar, can be yours for a mere $8.5 million.

"And everything about this house is a kaleidoscope of views," Saar said. "There are so many fascinating views. The coastline north and south, the mountains with the mist rising today, just redwoods in the back."

"Every house is totally different," he said of Muenning's work. "It's like a sculpture of another subject all together. But they all have the same theme of functional art. So, you're living in a piece of art."

You might call Earl Stein's dream house a piece of FOLK ART, which began life as a grain silo. Its owner admits he built the place to please just one person . . . himself.

"My concept was to design a place for me, at this place in my life - the ultimate man cave, or the ultimate man's house," he said. "The men out there know a lazy boy, a remote control and a fridge is really the essentials of life!" 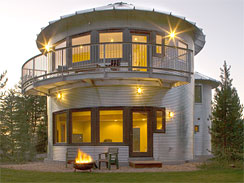 (gigaplexdesign.com)
Stein calls his house on the banks of the Provo River in Utah "Montesilo." For this avid fisherman, it's the perfect location for the house of his selfish dreams.

Lloyd Kahn admits that he, too, built his house in Bolinas, California just to please himself . . . a house he's been working on for 40 years.

"I chose everything &30151; the wood for the floor and for the walls and, you know, the way things are arranged and, you know, designed it according to the way I wanted to live," said Kahn.

Kahn built his house largely with his own hands, and in books he's written since the 1970s he's encouraged others to do the same . . . to create a true home.

"There's some places that you walk into and the feng shui is good," he said. "The dream part for me is just the feeling on the inside, you know?"

Most everything in his house, including his front door, is salvaged or recycled.

He has a do-it-yourself workout room, too, with what he calls the ultimate low-cost exercise device: A piece of rope and a branch.

His fitness at age 75 seems proof that a modestly-equipped home can work just fine . . . a message Sarah Susanka, author of the "Not So Big House" books, says is particularly appealing in these tough economic times.

"Many people have realized they can't build that dream home that they thought they could, or at least they have to pare down that vision somewhat," she said. "And so they're learning that they can get a really, really wonderful house that actually sings more loudly than if they had all that square footage."

The Levy family's house is a case in point. They had outgrown their small ranch house in Deerfield, Illinois, but weren't quite ready to leave.

"It wasn't going to be a dream house, 'cause we weren't starting from scratch," said Celie Levy. "We had a good ten year span we were going to move, but we loved our neighborhood."

With the help of architect Bud Deitrich, who Levy found through Susanka's website, the family re-imagined their little ranch house.

They opened up the living area, added a new master bedroom . . . and plenty of light.

The kitchen, with windows looking out to the backyard garden, is now the center of the house.

"We live in this room - this is where all the action of the family takes place, including a lot of homework," Celie said. "My kids can sit here while I'm cooking, and it turns out, as a family, we generally eat in this room."

Many of these ideas, says Sarah Susanka, are not new, or hers alone . . .

In fact, Frank Lloyd Wright designed a small house on a quiet street in Evanston, Illinois, to be affordable and beautiful. It cost $5,000 to build in 1905.

"It's about 1100 sq feet, four small bedrooms, one bath upstairs," said Gordon Gibson, giving a tour of the Brown House. "The main room is made to look bigger, and it's divided into three areas.

Gibson has been restoring Wright's little masterpiece, room by room, for 10 years.

"I'm sure if Mr. Wright could be around, he would be thrilled that somebody is taking as much good care of this house as you are," Susanka told Gibson.

The same respect for an old architectural gem is seen at Hendrick's Head Light, at the tip of Southport Island on the coast of Maine.

Designer Marty Moore is helping Ben and Lou Ann Russell, the owners of the old lighthouse, turn it into a home that shines.

They've added a cottage of granite and brick, while respecting the history here that goes back to the 1820s.

"We located the stone cottage as far away as we could manage it, so that the lighthouse could be kept stark, and respectful to it," Moore said.

"It's just a stunning place to be," says Saar of his dream home.