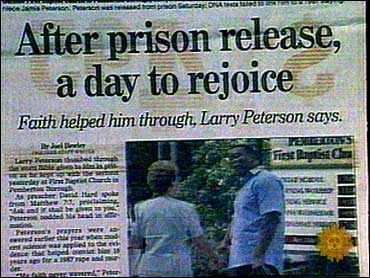 In Chicago Friday, 55-year-old Alton Logan, who spent 26 years in jail for a murder he did not commit, was exonerated. Over the years who knows how many Americans have been wrongly convicted and imprisoned - or even executed? And even when the mistake is realized, as it was for Logan, what then? Kelly Cobiella reports our Sunday Morning Cover Story:

At 51, Beverly Monroe was practically central casting for an accomplished middle class mom:

"I had a great life, absolutely great life," she said. "I had a super job, career. I had my own home. I was financially secure. My daughter Katie had just finished law school, my youngest daughter Shannon was a senior at William and Mary. My son was living with me and going to college.

"Things could not have been better."

"And then this happens," Cobiella said.

In March of 1992 Monroe found her longtime companion Roger de la Burde dead in his Virginia home, a bullet in his head, a pistol by his side.

By all appearances, it was a suicide. But the police told Beverly Monroe she was suspected of murder …
.
"I had no experience, no thought of ever being accused of anything," she told Cobiella. "I mean, it's incomprehensible."

It was equally incomprehensible to Beverly's daughter. But, as a young lawyer beginning a new job, Kate Monroe also knew that "incomprehensible" did not make her mother's conviction impossible.

It turns out she was half-right. In October of 1992, a jury believed not her mother but the prosecutor. Beverly Monroe was sentenced to 22 years in prison.

"I was convicted on not only no evidence, but just sheer speculation," Beverly said.

Lawyer Kate Monroe quit her job and spent the next six years searching for proof of her mother's innocence.

She found it in 1999. Prosecutors, she discovered, had withheld evidence showing that the likely cause of Roger de la Burde's death was suicide, not murder.

Seven years after her conviction, Beverly Monroe was released. 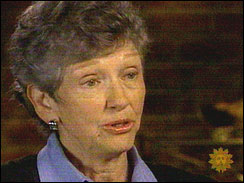 (CBS)
"The minute you're falsely accused, your life is gone," said Beverly (left). "Your life as you knew it will never be the same."

"In that time, what do you think you lost?" Cobiella asked.

"You lose everything that you had in a normal life," Beverly said. "For me it was house, job, career, income, separation from my family. You lose health insurance, life insurance, all of the security that you had."

Monroe tried to get it all back, starting with a job. And though she had a good earlier job history, along with a masters degree in chemistry, she also had a prison record.

"See, what I did, and also the most honest approach, is just to talk to people and tell them what happened."

"Did that work?" Cobiella asked.

"No," Beverly laughed. "Everybody was extremely empathetic and shocked and stunned. And didn't quite know what to do with that."

"But they didn't want to hire you."

"I don't think any of these people realize what they're up against," said Peter Neufeld, co-director of the Innocence Project, the group that - using DNA evidence - so far has helped free 235 people falsely convicted of serious crimes, 17 on death row.

"And the reason is that, when they first come out, not only is there the fame that comes with the media sort of capturing that moment of freedom, but also, they feel, 'Okay, now I've been vindicated. Now everything will come to me, finally, that's been kept from me for so many years,'" said Neufield.

"So there's an expectation. Unfortunately, reality is different than expectations, particularly for these wrongly convicted."

Just ask Larry Peterson. He was found innocent and released over three years ago after being sentenced to life plus 20 years for the 1987 killing and sexual assault of a young woman in New Jersey.

"Yes, I always knew I would get out," Peterson told Cobiella. "I just didn't know when. I didn't know how, you know, but that day came."

He was 37 when he went to prison. He was 54 the day he walked out, freed because a DNA test had proved his innocence.

We met Peterson in the parking lot of the truck driving school from which he'd just graduated. He was hoping that, after years of failure, it might lead to what he says would be his first job since being released from prison.

"When I went out to seek employment, any place that you go - and they do a criminal background check, when it come back and I have 'murder' upon my jacket, if you have 'rape' up on your jacket, you can't get a job."

"But you were exonerated," Cobiella said.

"What's that?" Peterson laughed. "What does that mean? It simply means that you are out of prison. It doesn't mean it erases your record."

"When they go to an employer and they bring the newspaper saying they were exonerated, the employer says, 'Well, that's wonderful. But, you know, you've got a 20-year black hole. And besides, even if you were innocent, you hung around some pretty mean characters for 20 years. I'm f------ sorry, you just don't have the skill set I need. I wish you well, but I can't hire you.' And, 'I can't give you this apartment.' And, 'I can't give you credit.'"

"Are you angry about all of this?" Cobiella asked.

In the courtroom Thomas McGowan heard a judge express sympathy: "Words cannot say how sorry I am for the last 23 years."

Twenty-three years - that's how long McGowan was in prison for a burglary and rape he didn't commit. 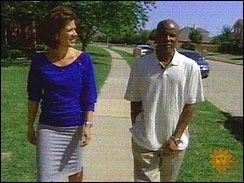 (CBS)
And while Thomas McGowan's life has changed … "It feels good to go down the street, I am not there at a place with barbed wire, and fences. I am free" … the world around him has changed even more.

Cobiella took him for a tour of a Circuit City store. "Ever been to a big store like this?" she asked.

"Welcome to the world of electronics!"

She showed him large flat screen TVs, home theatre systems. "When I went in, could only see that at the movies," he said.

She showed him a laptop computer and its finger control. "That's the cursor. You've seen that?" she asked.

But it turns out that "whole new world" can be tougher than a prison yard.

"I ain't got no choice but to say it will be beautiful," McGowan said.

As for Beverly Monroe, she's working, but as a low-paid administrative assistant with no benefits.

She says playing piano brings some peace. Still, she misses the lifestyle she lost:

"It would not be enough to survive on if I did not have still some savings, and Social Security," she said.

Her mother's ordeal has also changed her daughter, Kate. After Beverly was freed, Kate moved to Utah to head the Rocky Mountain Innocence Project.

Last year, she watched Utah Governor Jon Huntsman sign a compensation law that she helped push through the state legislature. It gives exonerated prisoners about $35,000 for every year of false imprisonment, up to 15 years. Their criminal record is expunged.

But 25 states have no such program.

The other half provides a patchwork of compensation.

The laws in Virginia provide nothing for Beverly Monroe.

But Kate, who knows so well what can happen to innocent people wrongly convicted, still considers her mother lucky:

"The reality is, this is a triumphant story. We had a happy ending. And so if anybody were to say, you know, 'Your mom's doing really well-off, considering,' I would say, 'Absolutely.'"

"Well, I think most people believe 'it'll never be me,'" Cobiella said.