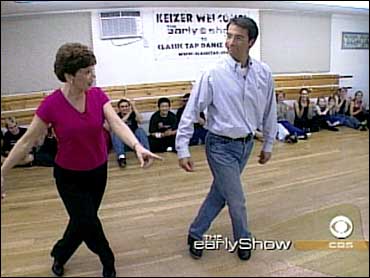 You have to be happy with yourself if you're going to have a healthy life. Jane Morehead from Keizer, Ore., found out that losing weight meant dieting and keeping it off meant changing her life.

The Early Show's Dave Price has her story for the final installment of the series "My New Life." The following is his report.

It doesn't always rain in Oregon; sometimes the sky is beautiful and bright like the face of a child learning to dance. Jane Morehead was a dancer from a very young age.

Her older brother Danny Wold was with her step by step, she says, "We were together at such a young age. I remember going on stage and he was right there with me."

When she was young, Morehead's dream of dancing for a living seemed to be possible, but as she grew older -and her body changed- the dream faded, and nearly died.

"All I ever wanted to do was be a dancer," she says. "And it didn't happen. And the next thing you know I started eating."

And as Morehead got bigger, so did her problems.

She says, "So many people handle weight differently. I feel guilty now when I look back. I was only 50-60 pounds overweight and it ruined my life. I couldn't face going out the door. I got a job and wouldn't show up for work because I'd have crying spells over what I was going to wear. I couldn't function in life."

Morehead's self-esteem hit rock bottom. At 5-2 and 175 pounds, she stopped having her picture taken.

"I was suicidal," she says. "I almost committed myself to the mental hospital one time. You cannot know what people go through until you've been there. "

Morehead knew that being happy was the key to staying thin. And dancing had always made her happy. So five years ago, she and Danny quit their corporate jobs and took a leap of faith. They opened, Classic Tap, a dance studio of their own. Jane Morehead teaches about 14 one-hour classes a week, so keeping the weight off is no longer a problem.

She saw some parallels between her story and mine.

And happiness is one of the key elements of getting your weight under control. If you love what you do, you'll probably be more likely to take care of yourself. It worked for me and it worked for Morehead.

After I read her letter, I wanted to meet her.

To those struggling with weight issues, who are learning about her story, she says, "My heart goes out to them. I didn't know what they went through until I was fat."

Now, Morehead is a role model to her kids, all 150 of them, so I figured that if she could teach all of these people to dance, she might be able to show me a move or two.

Reflecting on her career turn and new life, she says, "I'm here and there's a reason, I think. I think there's a reason I gained all that weight for years, later to tell that story that it can be done. And dreams come true. This is my dream - I get emotional - and I love these kids and I love teaching. I made it."

Thanks to Jane Morehead and all the people who wrote in. And we'll tell as many of your stories as we can in the months to come.