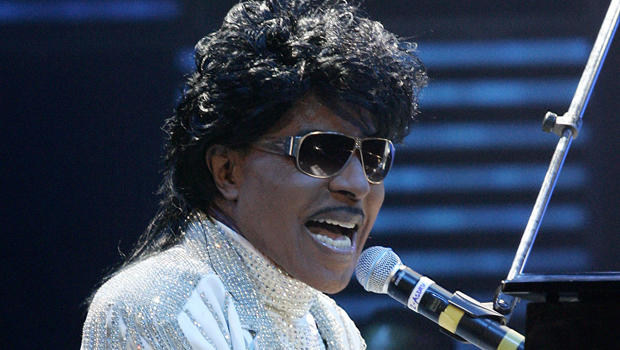 Born in Macon, Ga., in 1932, Richard Penniman put wild abandon into rock 'n' roll.  He sang like a cat on a stove.  He instructed Lennon and McCartney on how to sing the high OOOOO's when The Beatles opened for him in Hamburg in 1962.  [Billy Preston was in Richard's band at the time; that's how The Beatles became friends with Billy.]

Little Richard was a flamboyantly gay child in the segregated South in the 1940s.  We will never know what private pain he endured.  He was first put on stage by the great Sister Rosetta Tharpe, after he got up the nerve to approach her before a show.  The audience loved him.  He knew right then that he had a destiny.

He took off with a touring revue, the last gasp of vaudeville and medicine shows.  Eventually he made it to New Orleans and started making records.

Those records rocketed around the world.  They blew up the imaginations of the young Beatles in Liverpool, and the future Rolling Stones in London.  Bob Dylan told me once that he wore his hair so wild in the 1960s to look like Little Richard, his high school hero.

Jimi Hendrix was fired from Richard's band for trying to steal attention from the Quasar – not that anyone ever could.

As a singer, Richard was unmatchable.  As a rock 'n' roll songwriter, he was one of the all-time greats. "Long Tall Sally," "Tutti Fruitti," "Lucille." Even the titles are exclamations!

Equally revolutionary was how Little Richard looked, how he displayed himself. So much of the theatricality, the visual presentation of rock 'n' roll came from Little Richard – the high hair, the crazy makeup, the sexual transgressiveness. From David Bowie to Prince and way beyond, the rules Richard broke stayed broken.

On a Sunday morning in 2006, I arrived at the Nashville airport more than two hours early for the first flight to New York.  I was coming from the Bonnaroo Festival a couple of hours south of the city, and I had overestimated how long it would take to get there.  The terminal was empty.  I got to my gate and there was one other person there: Little Richard.  He told me he was on his way to Billy Preston's memorial service.

I can't tell you how great it felt to realize that, rather than sit and look at the clock for two hours, I was going to pass the time with Richard Penniman! I had seen him in concert, of course, and sort of met him once at Ben Frank's diner on the Sunset Strip ("sort of," because when I realized that Richard was flirting with me, I withdrew), but I had never had the chance to have a conversation with him.

As the first flights arrived and passengers began disembarking, Richard waved and greeted people like he was the mayor.  Many of these arriving passengers looked away and walked a little faster; some realized who he was and stopped and shook hands and snapped pictures.

A few African American soldiers were arriving from Iraq. Richard called them over to thank them for their service.  At first they looked wary, but when he announced, "I'm Little Richard!" they broke into big smiles.

The airport woke up, the crowds came in, and Little Richard was holding court.  When they announced our flight was boarding, an airline rep appeared with a wheelchair and loaded Richard into it.  I was shocked.  It was like seeing the light of the universe brought down by gravity.

As they wheeled Richard past me, he told me to say hello to James Brown. I said I would. You can't argue with a comet.