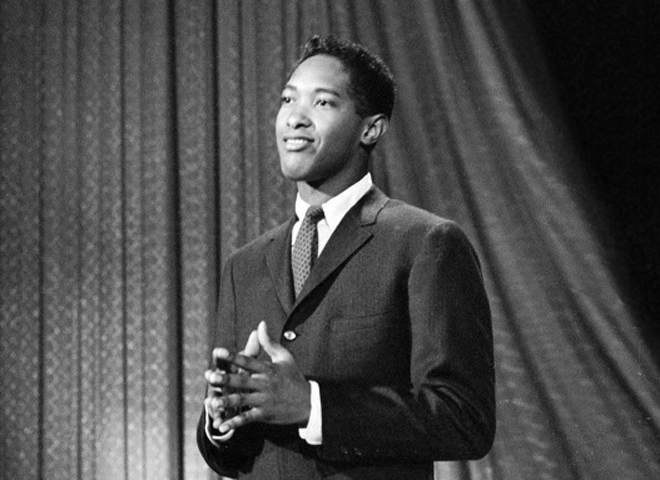 One of the greatest songs of the sixties, "A Change is Gonna Come," was released as a single Christmas week 1964, 50 years ago.

Sam Cooke, the man who wrote and sang the song, had died 11 days earlier.

Half a century later, the change is still coming.

Cooke was a big star in the early '60s. "Chain Gang," "You Send Me," "Another Saturday Night," "Cupid," "Bring it On Home to Me" -- the hits he wrote and sang are still familiar today. But in 1963 a shadow fell across his life. His baby son drowned in the family swimming pool. In the aftermath of that tragedy, Sam's marriage began to come apart.

While on tour in Louisiana, he was refused a hotel room because he was black. He protested so loudly that the police were called, and Cooke was jailed. No matter how big a star he was, Sam Cooke was also a black man in segregated America.

When he heard Bob Dylan's "Blowin' in the Wind," Cooke said it should not have been a white boy who wrote that song. Out of all this (and a lot more we'll never know), he wrote "A Change is Gonna Come."

It's an amazing song -- direct and honest. After a line about being turned away from a movie theatre, Cooke sings, "I go to my brother and say Brother help me please/But he winds up knocking me back down on my knees."

Cooke was not cloaking his meaning in metaphors about trains a-comin' -- he was talking about bigotry in plain language. Most remarkable for 1964, the song uses gospel imagery while admitting to fear of death and doubt about eternal life.

Cooke promised the song to Martin Luther King Jr. for a fundraising album for the Southern Christian Leadership Conference. The song gave voice to the spirit of the movement. It became a cultural touchstone. Spike Lee used it for the climax of his film "Malcolm X." Barack Obama quoted it when he was elected president.

Sam Cooke had everything -- talent, charisma, intelligence and great gifts as a songwriter and record-maker. If he had lived past 1964 and become further involved in the social struggles of the time, his influence would have been incalculable. Years before Marvin Gaye did "What's Going On" or Stevie Wonder sang "Living for the City," Sam Cooke could have been a voice for millions who had no voice.

But on December 11, 1964, he was killed in mysterious circumstances by a hotel clerk who claimed Cooke attacked her. We'll never know for sure, but it is likely that Cooke suspected the clerk of conspiring with a prostitute to rob him. Whatever really happened that night died with him.

But "A Change Is Gonna Come" lives on. It adapts to changing circumstances while remaining constant. It promises progress while admitting that progress comes slowly and with great sacrifice. It never goes out of style, because the issues Cooke articulated still haunt America.

Christmas is the season of hope; New Year's Day is the celebration of change. Even when we're not sure what's ahead, we keep moving forward toward the light. The change is always coming.


"A Change is Gonna Come"
Written by Sam Cooke. Published by ABKCO Music, Inc. Reprinted by permission. All rights reserved.

I was born by the river in a little tent
Oh and just like the river I've been running ever since
It's been a long, a long time coming
But I know a change gonna come, oh yes it will

It's been too hard living but I'm afraid to die
Cause I don't know what's up there beyond the sky
It's been a long, a long time coming
But I know a change gonna come, oh yes it will

I go to the movie and I go downtown
Somebody keep telling me don't hang around
It's been a long, a long time coming
But I know a change gonna come, oh yes it will

There been times that I thought I couldn't last for long
But now I think I'm able to carry on
It's been a long, a long time coming
But I know a change gonna come, oh yes it will.

Linda Ronstadt: A taste of home
More
Thanks for reading CBS NEWS.
Create your free account or log in
for more features.
View CBS News In
CBS News App Open
Chrome Safari Continue
Be the first to know
Get browser notifications for breaking news, live events, and exclusive reporting.