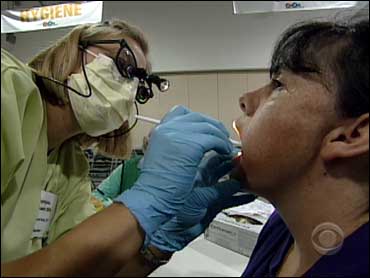 Going to the dentist can be a painful experience. But for many, the real pain comes when trying to pay for it. More than 100 million Americans don't have dental insurance. That's more than one-third of Americans. What can they do? CBS News correspondent Seth Doane found one answer, as part of his continuing series on The Other America.


Even before dawn, some people have been waiting for hours.

When Doane visited the line outside a free dental clinic, he asked "what time did you guys get here?"

Others have waited for years just to see a dentist. It's a luxury the uninsured can't afford.

But in Loveland, Colo., for two days only, dental care is free.

Bruce Bergstrom, head of Doane said to volunteer pedicatric dentist John Fales. "Yeah, it is, but it's just a way to give back," he said.Fales closed his Kansas City office for a few days and flew five members of his staff to the clinic.One of his first patients is 8-year-old Jericho Rogers, who was up at 2 a.m. to get there."He says he hasn't seen a dentist in three or four years - are you surprised by looking at his mouth?" Doane said."No, not at all," Fales said. "There's a lot of children running around in the United States that have cavities just like this - and mostly just for lack of good dental insurance coverage."Jericho's parents need help, too. His mom's job at a sandwich shop doesn't provide dental.If she had to have six cavities filled by a dentist and pay for it, what would she have to pay?"Probably over $1,000," said dentist Stephanie Kaufmann. "A thousand dollars? That's my rent payment a month - so, it's either rent or get my teeth fixed … well, I'm going to go for a roof over my head!" Cindy Rogers said.

Her husband, Richard, has a mouth full of problems, too. A job in a lumber store that doesn't cover it and a price tag he can't afford.

About 1,500 patients were treated that day - and given more than $1.2 million worth of care

"I can't afford this expense," said Mandy Lujan, who brought her toddler in. "So it's a blessing to be able to bring her here and have the work done that we need to have done."

A trip to the dentist is nothing anyone looks forward to, but for those who can't afford to go at all, a little pain doesn't hurt at all.