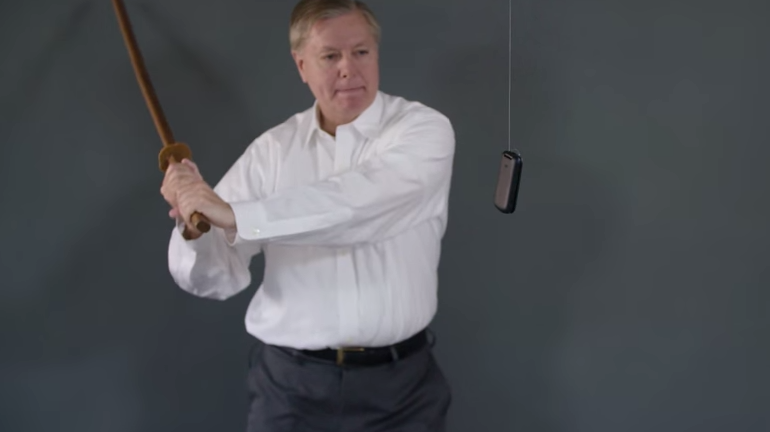 A day after Donald Trump read his telephone number aloud during a campaign appearance, South Carolina Sen. Lindsey Graham is offering a tutorial on how to destroy your cellphone.

In the video, released Wednesday by IJReview, Graham is shown disposing of a phone in a number of creative ways. He lights it on fire, throws it off a roof, chops it with a meat cleaver, grinds it in a blender, slices it with a sword, drops a cinder block on it, bakes it in an oven, and tees off on it with a golf club.

"Or if all else fails, you can always give your number to 'The Donald,'" Graham suggests at the end. "This is for all the veterans," he adds before throwing the phone off-screen.

The feud between Graham and Trump, both competing for the 2016 GOP presidential nomination, began Saturday when Trump suggested Arizona Sen. John McCain, one of Graham's closest friends, is not a war hero because he was captured during the Vietnam War.

Graham fired back, calling Trump a "jackass" during a Tuesday appearance on "CBS This Morning."

That didn't sit well with Trump, who told an audience in South Carolina that Graham once gave him his phone number and asked Trump to mention his name during an appearance on Fox News.

"I wrote the number down," Trump said, holding aloft a piece of paper with a phone number scribbled on it. "I don't know if it's the right number. Let's try it." He read the number aloud, as the audience laughed and the television cameras rolled.

Graham received a predictable inundation of phone calls, and he tweeted a good-natured reaction to the situation later on Tuesday: