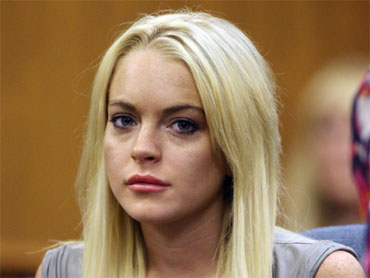 Lindsay Lohan is making headlines again - even while behind closed doors in rehab. The starlet is under investigation for allegedly assaulting a staffer at a rehab facility in California.

On "The Early Show," CBS News correspondent Ben Tracy reported Lohan has been mostly out of the public eye during her stint at the Betty Ford Center in southern California - except for the paparazzi's lenses. But all that has changed after an alleged incident with a female staffer that has placed the 24-year-old actress under investigation.

On Dec. 12, Dawn Holland called police to report a physical altercation with the troubled actress. The staffer tells TMZ.com she confronted Lohan about breaking her curfew, and was trying to administer a breathalyzer test, when the alleged incident occurred.

Holland told reporters, "She pushed me when I had told her, 'Take her hands off another patient.'"

Holland claims that she smelled alcohol on Lohan's breath, and when she was on the phone with police, Lohan wrenched the phone from her, injuring Holland's hand. Lohan says Holland touched her first, and will file a formal complaint. Holland has since been fired by the Betty Ford Center for discussing the incident.

And now, Lohan is saying, according to TMZ.com, that she is the victim.

TMZ reports Lohan claims the Betty Ford staffer was so abusive that she reduced her to tears. Lindsay claims witnesses that saw the incident and there's surveillance camera footage to prove her side of the story, according to the report.

No arrests have been made in the case, but in a statement to CBS News, police said "Lohan has been reported as a suspect in the investigation and the victim desires prosecution."

CBS News Legal Analyst Lisa Bloom, Lohan's father's former attorney, said, "If Lindsay is found to have committed this crime, she could go immediately to jail as a probation violation."

Tracy reported Lohan's current stint at Betty Ford is her fifth stay in rehab and her second this year.

Michael Lohan, Lindsay Lohan's father, said on "The Early Show," he agrees with his daughter's account of the incident and believes these charges are baseless.

He said, "I've been with Lindsay from the beginning of this and I've seen how it's twisted and turned, and to be quite honest with you, I don't know how this kind of a thing can happen, and be twisted the way it has. … It's very trying on Lindsay, and I'm very disturbed by it."

"Early Show" co-anchor Russ Mitchell said, "Your daughter is scheduled to leave rehab next month. How concerned are you the latest incident will mean she actually will go to jail for six months?"

Michael Lohan said, "I have a lot of confidence in Shawn Chapman Holley (Lindsay's attorney) and in God and know the truth will come out. Even on 'Celebrity Rehab' with Dr. Drew or the program I work with, it would have been handled differently. I do give Betty Ford a lot of credit for helping my daughter. She's made an 180-degree turn. She's doing extremely well. She's healthy, she's more - she has more clarity than I've seen in a long, long time. It's just, you know, it's very hard for her to deal with this type of thing. If Lindsay's wrong, I'll say it and I'll tell her but when she's right, I will stand behind her 100 percent and go to the end for her and she's right."

For more with Michael Lohan, click on the video of his full interview below.