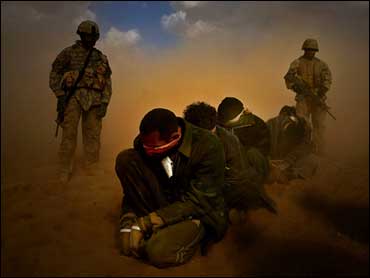 "Taxi to the Dark Side," a documentary detailing the Bush administration's policies on prison torture, won best documentary at the Tribeca Film Festival.

The winners were to be announced Thursday evening at an awards dinner in downtown New York.

Directed by Alex Gibney (who made the 2005 documentary "Enron: The Smartest Guys in the Room"), "Taxi to the Dark Side" takes the death of an Afghan taxi driver as a leaping off point for a more expansive view of American treatment of prisoners captured in Iraq and Afghanistan.

The Jewish drama "My Father My Lord," directed by David Volach, won the Founders Award for best narrative feature. The film follows an Orthodox rabbi struggling to keep his faith and family.

The Tunisian film "Making Of" won for both screenplay and best actor. Written and directed by Nouri Bouzid, the film stars Lofti Edbelli as a break dancer who falls in with a fundamentalist group that intends to make him a terrorist.

Photos: Premieres And Parties At Tribeca

Limp Bizkit frontman Fred Durst's directorial debut won the festival's "Made in NY" award for his film "The Education of Charlie Banks."

The documentary "A Walk into the Sea: Danny Williams and the Warhol Factory" won the "NY Loves Film" award, while the narrative film "The Killing of John Lennon" won a special jury recognition for the "Made in NY" category.

The sixth annual Tribeca Film Festival, founded by Robert De Niro, Jane Rosenthal and Craig Hatkoff, runs through Sunday. The audience award, dubbed the Cadillac Award, will be announced at the closing night on Saturday, when the HBO produced documentary "The Gates" will premiere.