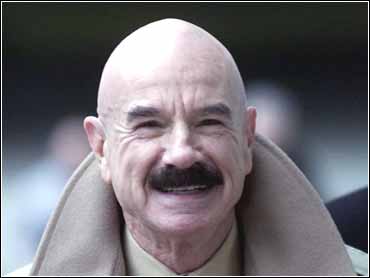 A federal judge declared a mistrial Thursday and dismissed the $5.1 million defamation lawsuit against Watergate conspirator G. Gordon Liddy after the jury was unable to reach a verdict.

The jury deliberated eight hours over two days before sending U.S. District Judge J. Frederick Motz a note reading, "No way we can reach a verdict."

Ida "Maxie" Wells, a former secretary at the Democratic National Committee, sued Liddy for saying that the Watergate burglars were searching Wells' desk for a package of call-girl photos believed to include a picture of the future wife of John Dean, the former Nixon White House counsel.

Liddy took the stand earlier this week and stood by his account. He said the burglars who broke into the Watergate were not looking for political intelligence on the 1972 campaign, but compromising photos.

Dean has said the theory is ridiculous. His wife, Maureen, has disputed the existence of such a call-girl ring.

Of Nixon's deputy campaign director Jeb Stuart Magruder's testimony that the Watergate break-in was approved by John Mitchell, the former attorney general who headed the re-election campaign, Liddy said: "If Mr. Magruder told me it was noon, I would go out and look up at the sky to check."

Of Dean, who didn't testify, Liddy said: "Sir, as I have said before and I will repeat until my dying day, the man is a serial perjurer."

The bad blood between Liddy and Dean has remained strong since the Watergate scandal, when Liddy refused to talk and received the harshest sentence among the conspirators, and Dean cooperated with prosecutors and received just four months.

Asked on cross-examination if he had ever considered killing Dean, Liddy replied: "The answer is: I wouldn't consider him worth the quarter it would cost to buy the cartridge that would propel the bullet to kill him with."

John and Maureen Dean have denied Liddy's theory and sued him for libel in 1992. That case was dismissed without prejudice, meaning it could be refiled.

"It's been extremely hurtful and humiliating to be linked to this imaginary call-girl ring," Maureen Dean told The Associated Press on Tuesday in what she described as her first interview on the subject in 10 years.

b>"I know he hates my husband, but I know on some level he's trying to lessen his culpability and stupidity for the Watergate break-in and to get even with my husband for exposing all of the criminal acts in the Nixon White House."

Asked about Liddy's attacks on him, John Dean told the AP, "I'd like to testify and I'd love to have the jury see all the evidence that shows the falsity of Gordon Liddy's claim. But this case isn't Liddy vs. John Dean."

John Dean was originally listed as a potential witness but Wells' attorneys decided not to call him. He said his testimony would have been a distraction.

"Rest assured, I'm not going to let Liddy get away with this," he said.

Liddy's testimony was his first about the particulars of the Watergate break-in. He refused to testify during his 1973 trial and was sentenced to more than 20 years in prison. He had served four years and four months when President Carter commuted his sentence.

By SETH HETTENA
©MMI The Associated Press. All Rights Reserved. This material may not be published, broadcast, rewritten, or redistributed