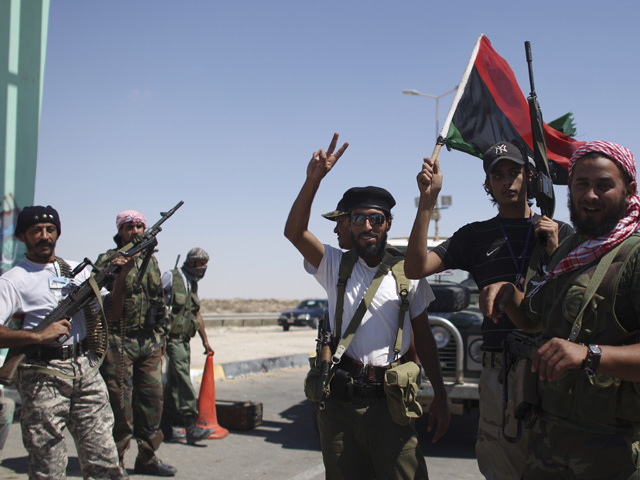 BENGHAZI, Libya - Libyan rebels battling Muammar Qaddafi's troops along the country's Mediterranean coast said they have captured all of the strategic eastern port city of Brega, which has repeatedly changed hands in the 6-month-old civil war.

Brega's capture is an important boost for the rebels. It contains Libya's second-largest hydrocarbon complex and is where the country's main oil fields feed into for refining.

"We have liberated Brega and all of it is under our control," Bani told The Associated Press on Saturday. "The fighters are in the port and taken the refineries."

His claim could not be immediately verified and officials in the Libyan capital Tripoli made no comment on it.

Brega is a wide strip of desert made up of two residential sections about 6 miles (10 kilometers) apart, followed by the oil refineries near the port on the Mediterranean Sea.

Brega, about 125 miles (200 kilometers) southwest of the de-facto rebel capital of Benghazi, fell under rebel control briefly in March, but was recaptured by Qaddafi's forces shortly afterward. The fighting around the city has gone back and forth since then, with the rebels struggling to keep their ground.

Rebels closed in on Qaddafi, pushing back his fighters in a fierce battle in one key coastal city and seizing another town as they advanced toward his remaining bastion, the capital of Tripoli.

The territory remaining under Qaddafi's control has been shrinking dramatically in the past three weeks, with opposition fighters moving closer to Tripoli, a metropolis of 2 million people, from the west, south and east.

At the nearest point, rebel fighters are just 30 miles (50 kilometers) west of Tripoli, in the coastal city of Zawiya, where battles raged Friday over control of the city center. Qaddafi's forces pounded rebel-held areas of the city with rockets, mortars and anti-aircraft fire, but by nightfall were pushed out of a multistory hotel on the square.

NATO's bombing campaign has made it difficult for the regime to send massive reinforcements to Zawiya, enabling the rebels to maintain a hold over much of the city, their biggest prize in months.

But Friday's onslaught by regime forces also signaled that an opposition push toward Tripoli could be arduous and bloody. The massive fire at one point pinned down some two dozen rebel fighters behind a building about 200 yards (meters) from Zawiya's central square, a symbolic prize in the battle for control of the city of some 200,000 people.

The area was deserted, with building facades blackened and scarred by bullet holes.

The men took a break for Muslim noon prayers, washing their hands and feet with water from plastic bottles, then kneeling on carpets under an olive tree.

East of the capital, rebels seized the city of Zlitan after clashes with regime forces that left 31 rebels dead and 120 injured, a spokesman said. Zlitan had been a major obstacle in the rebels' push toward Tripoli from the east.

"The fighters have liberated Zlitan and they are fighting west of the city," said Munir Ramzi of the opposition Misrata Military Council. He said Qaddafi's forces were fleeing after Friday's victory and the rebels are in control of the city.

With the recent advances, the rebels cut off the coastal road to Tripoli from the east and the west, and also control a city along a major supply road to the capital from the south.

Dealing another blow to the increasingly isolated leader, Libyan rebels said Friday that Abdel-Salam Jalloud, a close Qaddafi associate who was once the No. 2 top regime official, has defected.

Jalloud helped Qaddafi stage the 1969 coup that propelled him to power and transformed Libya from a monarchy to a republic. He was Qaddafi's most trusted deputy for two decades but began to clash with the leader starting in the 1990s.

Rebel spokesman Mahmoud Shammam said that Jalloud had fled to a rebel-held area in the western mountains and was on his way to Europe. Pictures showing Jalloud in the western town of Zintan appeared on rebel Facebook pages. Jalloud did not issue any statements, but Shammam said he had confirmed the defection on the telephone.

Jalloud's defection, if confirmed, would be the latest crack in what remains of Qaddafi's regime, although the two men had fallen out. Rebels also said Jalloud could provide valuable information about Qaddafi's inner circle.

Rebel official Abdel-Hafiz Ghoga said the defection "gives us assurance that Qaddafi is weakening" while stressing that Jalloud would face justice for any crimes committed when he was part of the regime.