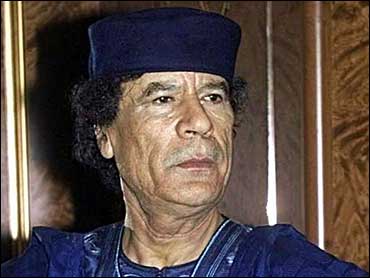 The move follows a decision by Libya to stop its programs to develop weapons of mass destruction. It was hailed as welcome news by Bolton, who said North Korea had provided Libya with its Scud missiles.

Last month President George W. Bush took steps to restore normal trade and investment ties with Libya, moving to allow resumption of oil imports and most commercial and financial activities as a reward to Moammar Gadhafi for eliminating his most destructive weapons.

Libya's actions "have made our country and the world safer," the White House said. But significant sanctions remain on the books as an inducement to Libya to resolve issues that are still pending.

In response, the administration two months ago lifted a ban on use of American passports to travel to Libya.

"Through its actions, Libya has set a standard that we hope other nations will emulate in rejecting weapons of mass destruction and in working constructively with international organizations to halt the proliferation of the world's most dangerous systems," White House press secretary Scott McClellan said.

Last year, Libya removed a major obstacle to more normal relations with the United States by meeting U.S. demands stemming from the bombing of Pan Am flight 103 in 1988. Libya accepted responsibility for the bombing and promised to pay $10 million in compensation to each family of the 270 victims.

In addition to the economic steps the White House announced, fledgling diplomatic ties will be upgraded to permit the opening of liaison offices in Washington ands Tripoli. This would be a prelude to the eventual establishment of normal diplomatic relations.

The easing of sanctions imposed in 1986 and those called for under a 1996 Libya sanctions law will allow a resumption of oil imports from Libya and permit most commercial activities, financial transactions and investments.