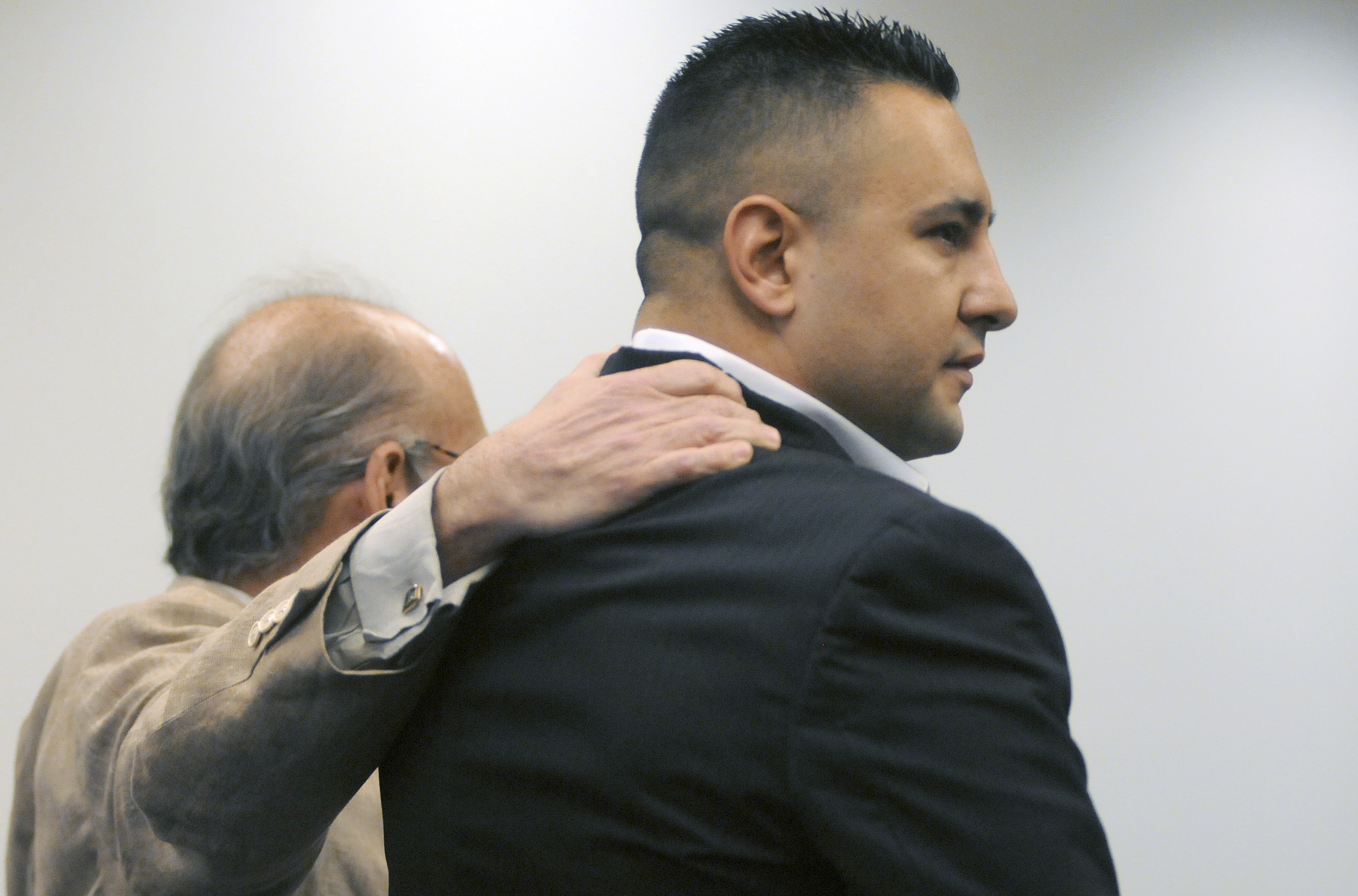 (AP) BERNALILLO, New Mexico - The monthlong criminal trial and all its salacious stories of law officer affairs and a blundering investigation are over, but a civil trial looms for a former Albuquerque policeman acquitted of killing his depressed wife with his department-issued gun.

After more than 10 hours of deliberations, a jury acquitted Levi Chavez, 32, of murdering of his wife, 26-year-old Tera Chavez, in 2007 and trying to make the hairdresser's death look like a suicide.

Upon announcing the verdict, the family of Levi Chavez, including his current wife Albuquerque detective Heather Chavez, let out gasps and wept. The former officer, clenching a Rosary, immediately embraced his attorney, David Serna. "What did I tell you?" Serna told Chavez.

Following the verdict, emotional family members of Tera Chavez were quickly escorted out of Sandoval District Court, the result of an edict from state District Judge George Eichwald who sought to ease tensions between the two families. "Justice was not served," Joseph Cordova, the father of Tera Chavez, said after listening to the verdict with his wife.

Meanwhile, in the courtroom, Chavez and family gathered to pray a "Hail Mary" until Serna grabbed Chavez by the arm to escort him through a crowded pathway of supporters and family members.

"I'm going to go to church, pray my Rosary and thank my Virgin Mary," Chavez said as he was crowded by reporters. Asked if he would try to get his old job back with the Albuquerque Police Department, Chavez blurted out a date but declined to say what that date meant.

Serna said he doubted that Chavez would want to return to the state's largest police department. "He's got several plans in the works," Serna said. "I don't feel like speaking for his future."

Chavez still faces a wrongful death lawsuit from the family of Tera Chavez. They allege the former officer killed his wife to keep her from disclosing an alleged staged theft of a truck for insurance money. Some of the evidence in the civil case, like testimony from an insurance investigator about the fake theft allegations, was barred in murder trial.

The city of Albuquerque already has paid Tera's family $230,000 to settle claims against it and its police department in the civil case.

That case is scheduled to be heard in state District Court in Bernalillo County and has been on hold while the criminal trial was held.

For weeks, the murder trial captivated parts of central New Mexico as residents were fixated in barber shops, diners and grocery stores. Much of the trial centered on allegations that Albuquerque police officers who responded to the Chavez home in nearby Los Lunas removed and even flushed key evidence down a toilet.

Witnesses also described a workplace where interoffice romance was rampant and said both Levi and Tera Chavez had affairs with members of the police force.

The tawdry details spilled in the trial and the questions it raised about the practices of the Albuquerque Police Department have further tarnished the agency, which is under investigation by the U.S. Justice Department over a series of police shootings.

In the trial's final days, Chavez took the stand and acknowledged having a string of mistresses, searching a website on how to kill someone with martial arts moves, and ignoring his wife's calls for help.

But, the disgraced former officer insisted that he did not kill his wife.

Serna said his client was a victim of an overly aggressive former detective and "lies" from local media outlets, although none reported Serna ever requesting for a retraction or correction from any stories since 2007.

"There never was a case against Levi Chavez," Serna said. "This was a made up pile of lies from the beginning and it took the jury approximately 10 hours to find that out."