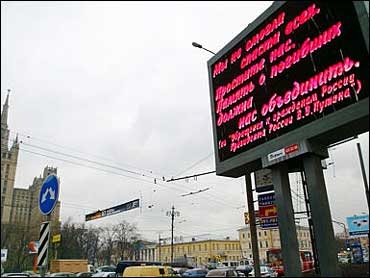 The lethal gas that killed 116 Moscow theater hostages may be an opiate related to morphine, U.S. officials said Monday.

Such substances not only kill pain and dull the senses but also can cause coma and death by shutting down breathing and circulation.

Doctors from a Western embassy examined some of the former hostages and concluded "the agent they were exposed to appears consistent with an opiate rather than a nerve agent," a U.S. embassy spokesman said, speaking on condition of anonymity. Opiates, including morphine and heroin, are derivatives of the opium poppy.

Moscow has refused to identify the gas, despite the heavy casualties that resulted from its use. Russian authorities did not tell medical officials what type of gas they pumped into the theater shortly before special forces troops raided it early Saturday, chief Moscow doctor Andrei Seltsovsky said.

In a 1960s war propaganda film, a healthy American soldier is given a psycho chemical, probably BZ.

The film shows him first going over an assault course normally, and then he begins having difficulty and quickly becomes disoriented.

If the Russians have used BZ or something like it on the hostages, it's a first. And western governments are watching closely.

Malcolm Dando, a chemical weapons expert told Palmer, "We know there's documentary evidence that in the west in NATO there is an interest in the development of these non lethal chemical incapacitants"

The Russians might be refusing to name the gas because it's illegal -- banned by international chemical weapons conventions. On the other hand, it could be a common chemical and easy to acquire, which they fear could wreak havoc in the wrong hands.

The gas can paralyze breathing, blood circulation, and cardiac and liver functions, doctors said. The effects were worsened by the extreme conditions endured by the hostages during their 58-hour ordeal — little movement, lack of water, food and sleep, severe psychological stress — and by the chronic medical problems some suffered.

Officials say all but 2 of the 118 captives who died were killed by the knockout gas used by Russian authorities.

More than 400 of the freed captives remained hospitalized, 45 of them in grave condition, said Deputy Prime Minister Valentina Matviyenko. Another 239 people had been released.

The White House is neither endorsing nor criticizing Russia's use of the powerful knockout gas to end the theater siege, reports CBS News Correspondent Mark Knoller.

Questioned by reporters, spokesman Ari Fleischer chose his words carefully, saying that all the facts and circumstances are not yet known, and he made clear the U.S. holds the hostage-takers responsible, saying they put people in harm's way to begin with by booby-trapping the building and taking hostages.

The U.S. Embassy said it had located the body of American Sandy Booker, who died during the assault.

Booker was an electrician at the General Motors plant in Oklahoma City and friends say he was in Russia to bring his Russian fiancée and her child to the United States.

Booker was one of two Americans believed to have been in the theater Wednesday night when Chechen rebels stormed it during the performance of a musical, along with about 70 other foreign citizens.

There is no information on the status of the other American.

For 24-year old Oleg Ziogonov, just home from the hospital, the siege was three nights of fear and one terrible wish.

Ziogonov tells CBS News Correspondent Richard Roth "To die quickly without pain. I think that was the will of the majority of hostages."

But Ziogonov recalls a single thought with certainty, "There was not any hope that everyone of us would be alive."

Meanwhile, President Vladimir Putin said he will give the military broader power to strike against suspected terrorists "wherever they may be."

Monday was a day of mourning in Russia. Theaters canceled performances and mourners left flowers near the site of the tragedy as Russia takes stock of what happened.

In televised comments, Putin said he would step up measures against terrorists because of what he called growing threats that they could use powerful weapons, and he suggested Russia would not refrain from launching strikes abroad.

"Russia will not ... give in to any blackmail. International terrorism is becoming more impudent, acting more cruelly. Here and there around the world threats from terrorists of the use of means comparable to weapons of mass destruction are heard," Putin said at a meeting with government ministers.

"If anyone even tries to use such means in relation to our country, Russia will answer with measures adequate to the threat to the Russian Federation. In all places where the terrorists, the organizers of these crimes or their ideological or financial sponsors are located," he said. "I emphasize: wherever they may be."

Putin has sought to portray the Chechen conflict as a battle with international terrorists, partly to get broader support abroad.

The Russian president also said the theater raid was planned abroad, and the Russian Foreign Ministry alleged Monday that al Qaeda was involved.

In a statement, the ministry said a Chechen conference that opened Monday in Denmark was organized "by Chechen terrorists, their accomplices and their patrons from al Qaeda, who, as is now absolutely obvious, stand behind the monstrous terrorist act in Moscow." It did not provide evidence.

There were about 800 people in the theater when it was seized by Chechen gunmen during Wednesday night's performance of the popular Russian musical "Nord-Ost," or "North-East."

Moscow officials said that relatives of the dead would receive about $3,150 in compensation, while hostages who survived would get half that, Interfax reported. The city will pay for funerals, it said.

The Federal Security Service said 50 assailants were killed at the theater; several were shot in the head apparently as they lay incapacitated from the gas. Three gunmen were captured, and authorities searched the city for accomplices who might have escaped.

Some of the attackers who burst into the theater Wednesday night had explosives strapped to their bodies; 18 were women who said they were widows of Chechens killed by Russian forces.

They mined the theater and threatened to blow it up unless Putin withdrew Russian troops from the rebellious, predominantly Muslim region of Chechnya.

Russian forces pulled out of Chechnya after a devastating 1994-1996 war that left separatists in control. In the autumn of 1999, troops returned after Chechnya-based rebels attacked a neighboring region and after apartment bombings that killed about 300 people were blamed on the militants.