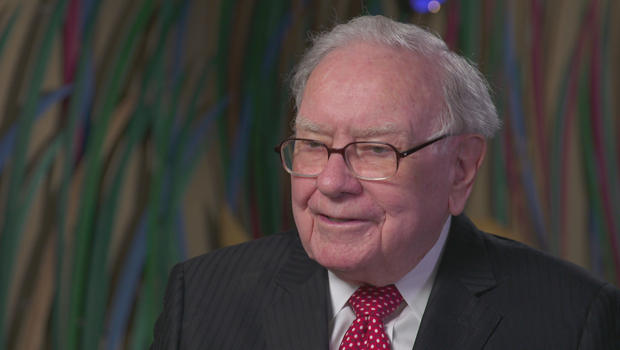 If anyone is a legend of modern commerce, it's almost certainly Warren Buffet, worth an estimated $78 billion, give or take So what's he REALLY like? Jane Pauley decided to do lunch:

"Fine dining in Omaha -- this is it!" laughed Warren Buffett.

If you should be lucky enough to be invited to lunch by a billionaire investor, add a shake to your burger and fries. "Stick with me Jane, your eating habits will go downhill fast!" Buffett said.

This is Buffett's secret to a long and happy life: "If I want to live a long time, I should keep eating like a 6-year-old, which I do!"

And here's another: "The big thing is, if you're working at something you love, that has to add a lot more years to your life than doing a few extra sit-ups, as far as I'm concerned."

"Not very many. If the market is falling or something like that, that's opportunity for us. So the stock market has never caused my stomach to churn."

Considered by many to be the greatest investor of all time, he says it's not rocket science: "I tell the students, 'If you've got 150 IQ and you're in my business, go sell 20 or 30 points to somebody else, 'cause you really don't need it," he said. "You need emotional stability. You need to be able to detach yourself from fear or greed, when that prevails in the market. You've gotta be able to come to your own opinions and ignore other people. But you don't need a lot of brains."

"But in the meantime, you've got a stadium full of people watching," Pauley said.

"And if you swing and you miss, it's a headline."

"Yeah, well, I'll have a few headlines too, maybe more than a few," he laughed. "But in the end, I know the pitch I like. You know, I want that one right down the middle, you know? Kinda slow."

Buffett built his fortune one a nickel at a time, beginning at age 7. "My grandfather had a grocery store, and he would sell me six Cokes for a quarter, and I would sell 'em around the neighborhood at a nickel each," he said. "It was a 20 percent profit."

And there were paper routes.

Pauley said, "Nobody gets rich peddling papers, do they?"

"Did you have a long-term plan at this point?"

"I was just having fun doing these businesses, and buying stocks with the money that I earned from it," he said.

He also read hundreds of books. One in particular: "The Intelligent Investor" by Benjamin Graham. "That book changed my life," Buffett said. "I finally found a philosophy that made sense."

"Can you sum it up in terms that I would understand?"

"It really says that a stock is a piece of a business. If you buy a piece of a good business, and somebody's running it for you, and they're honest and able, and you pay a reasonable price, you're gonna make a lot of money."

For instance, Berkshire Hathaway has a lot of money -- $20 billion -- in Apple.

Yet he doesn't own a smartphone. "I don't need to know things instantaneously," he said. "I'm not making buy-and-sell decisions based on instant news. I'm making them sometimes after I've looked at a company for years and years. When we bought Apple a year ago or thereabouts, it'd had been something I'd looked at a long time."

"But think of all the money you would have made if you hadn't looked at it quite so long," said Pauley.

"That's true! People remind me of that occasionally."

And what do you say? "Sometimes I make mistakes!"

An optimist, even in turbulent times, the "Oracle of Omaha" says never sell America short. "The country has 75 million homes owned by homeowners. It has 260 million vehicles. It has great interstate highways. It has great universities."

And a superb medical center, where Buffett and Pauley were visiting. This stunning, $323-million state-of-the-art cancer hospital and research center opened its doors in Omaha last spring -- at its core, a place of quiet beauty to heal the spirit.

It's the only building anywhere that bears the Buffett name ... but not Warren Buffett's.

"It's important who you turn a couple little kids over to," he said. "And she was four-star-plus. So we quickly weeded out all the others!"

"If my wife paid her, she probably got paid more than if I paid her!" Warren laughed.

After a few years, he saw a merger opportunity, and called his cousin, Fred: "'Have I got a girl for you!' And they took it from there."

Fred was a savvy investor, too. "He made his small investment in this partnership I ran back in the 1960s," Warren said. "Berkshire came out of that. We distributed the stock in 1970."

"He clenched it!" Warren added.

Fred and Pamela Buffett built a fortune of their own, until misfortune struck. Twenty years ago, Fred Buffett died of kidney cancer.

Pamela said, "I see his name up there representing somebody who loved Omaha, who cared about so many other people."

Warren's wife, Susie, a social activist, was Pamela's inspiration. "Susie Buffett had a profound impact on my life," she said. "She believed in mankind."

After Susie Buffett died in 2004, Warren decided to give away his entire fortune.

"Susie made a humanitarian out of you," Pauley said.

"Well, she changed me in a lot of ways," he replied.

Still a genius at making money, spending it is another thing. Buffett lives in the house he bought in 1958. "I'm living in our starter house, yeah. And it's a happy house."

Which happens to be his salary for running Berkshire Hathaway.

"Well, I don't ask 'em, actually!" he laughed. "Money has no utility to me. That's why I'm giving it away. Because it does have utility to other people.

"I mean, this country is fabulous. I've had this huge tailwind through my life because I've had American business behind my back. And this country works. It's worked magnificently.

"They being the 400 really rich people?"

"The 'trickle down' has not worked. It's all gushed upward, basically, instead."

With regard to business taxes, Buffett said, "To the extent that people think our tax rates make us non-competitive in the world, I think they're wrong."

"What about the argument that you cut corporate taxes, you make it easier to do business, you will grow the economy?"

"American business has done sensationally in recent years. They're awash, generally, in cash; debt is cheap; conditions are terrific for American business. And the country's going to do fine over time. The goal should be to make sure that every one of our 325 million people do reasonably well."

In American history, few have done as well as Warren Buffett, who made the decision to get rich at the age of 21. He exceeded his own dreams. But at 87, he's redefined the meaning of rich.

"If you really want to measure how rich you are, it's how many people love you -- or really, whether the people you care about loving you love you," he said.

Pamela Buffett added, "See, a great teacher. 'Cause it's so true. And that is what I learned as a young person, from being around him."

"I'm not in a hurry to do it!" Buffett laughed. "Well, I'd like it to say, 'Here lies the oldest man that ever lived,' actually! But 'teacher' will do fine."