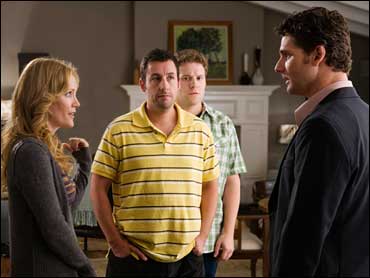 In the three movies Judd Apatow has directed, his wife, Leslie Mann, has taken on progressively larger roles.

In "The 40-Year-Old Virgin," she's a hot-to-trot drunken driver terrifying Steve Carell in the passenger seat; in "Knocked Up," she played Paul Rudd's wife; and in Apatow's latest, "Funny People," he's written Mann an even bigger role - the one-who-got-away from Adam Sandler's character.

"He's growing up and learning more about women so he's able to write better female parts," Mann said in a recent interview, referring to her husband.

But Mann quickly reconsidered that statement, amending that Apatow has always written good female roles, though he's generally improved as a writer. There's some sensitivity to the issue because the co-star of "Knocked Up," Katherine Heigl, famously criticized the movie for being "a little sexist" and claiming it painted women as "shrews."

"I kind of don't know what she was talking about," said Mann, who praised Heigl's performance in the film. "I'm an actress reading scripts and I've seen what's out there and it's slim pickings. Judd does write great female parts."

After several years concentrating on her family - she and Apatow have two young children - Mann is taking on more work.

Earlier this year she starred alongside Zac Efron and Matthew Perry in "17 Again." She has a part in Robert Rodriguez's family film "Shorts," which comes out Aug. 7, and she co-stars in "I Love You Phillip Morris," a Jim Carrey film due out in February.

She'll soon begin shooting "What Was I Thinking?" with Elizabeth Banks, whose own star rose partially thanks to her performance in "The 40-Year-Old Virgin."

"I have more time now. Nap times are over and my kids are bigger," says Mann, whose daughters Maude, 11, and Iris, 6, play small roles in "Knocked Up" and "Funny People." "My priority is my family."

Even in relatively small parts, Mann has made an impression with audiences, showing a particular talent for characters whose moods fluctuate greatly - and comically. In movies predominantly populated by immature men, Mann's characters hold their own, whether berating a superficial nightclub bouncer or dressing down a cheating husband.

But Mann, 37, still says she's not a full-time actress again, but is choosing parts here and there.

Born in San Francisco, Mann originally came to Los Angeles more focused on her career - a time recalled in "Funny People." The film uses footage of her earlier work to show the past of her character - also an actress.

Mann and Apatow met when she auditioned for 1996's "The Cable Guy," which Apatow produced. They married in 1998. In the years after, Mann began to give up movies - her earlier credits include "George of the Jungle" and "Big Daddy" - for raising a family.

"She's just beginning to show people what she's capable of," says Apatow. "She made a gigantic sacrifice to our family to be around during all their formative years."

Apatow expects to take a break and only produce a handful of films following "Funny People," which might mean he'll increasingly find himself following his wife on movie sets - a prospect he's relishing.

He just has one issue.

"I don't appreciate her kissing Zac Efron - I can live without that," he says. "But I thought the movie was great. See, Leslie is such a good actress, she can even look like she's in love with an incredibly handsome 21-year-old man."
By Jake Coyle